Bitcoin has lost almost 7% during the last 24 hours, according to Coinmarketcap data, taking analysts by surprise. Here are main reasons why the cryptocurrency is testing new support levels right now.

Bitcoin’s latest crash, which started on Wednesday afternoon, sent prices below the $9,500 level for the first time since July. 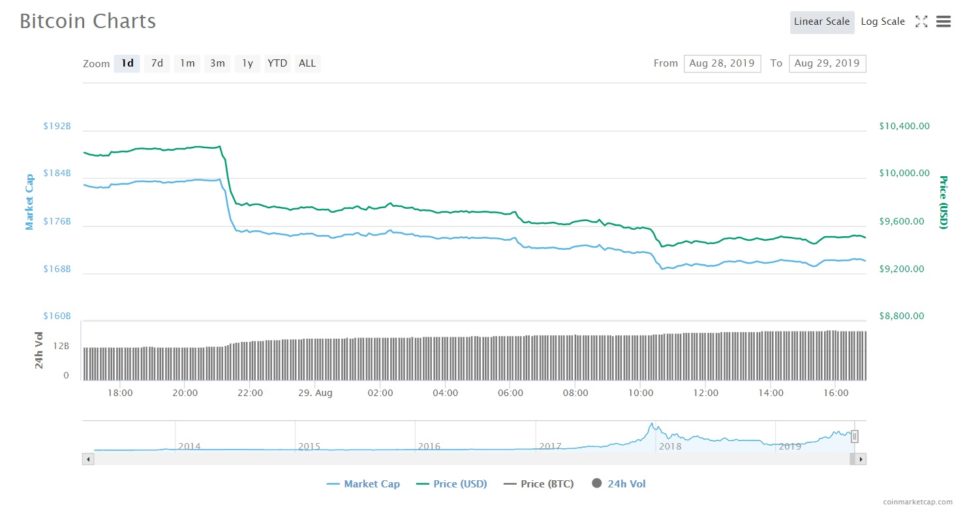 While it’s difficult to determine an evident catalyst of the bearish trend, some suggest that we should have a look at CME and other platforms providing crypto derivatives trading. This Friday coincides with the expiration dates for Bitcoin futures at the Chicago-based CME. Thus, many investors sold their holdings to settle the futures that are expiring soon, triggering the downtrend. About half of the open interest of BTC futures is about to expire tomorrow.

From our end, it looks like it was a sell-off to cash settle futures that are coming due on Friday for BTC.

It’s the week before Labor Day. Half of crypto is at Burning Man and the other half is sitting on their hands doing nothing. Volumes are low and it takes very little to move markets right now, and you have big futures/options expirations coming up at the end of the week.

On Wednesday, the ICE-backed Bitcoin futures provider Bakkt announced that it would launch its platform on September 23 after several delays. Interestingly, the company will make its warehouse available to institutional clients starting from September 6.

On Sept 6, our Warehouse will begin offering secure storage of customer bitcoin to prepare for the launch of Bakkt Bitcoin Daily & Monthly Futures when they launch on Sept 23

While you would think this should be a bullish signal for Bitcoin, there is a catch. Bakkt is aimed at institutional investors, and it’s natural that they would try to enter the market at the lowest possible price. Thus, the chances are that the whales are trying to put pressure on the support levels in an effort to drive retail investors to sell in panic. The resulted downtrend would allow whales to buy back in cheaper ahead of Bakkt launch.

During the last few months, Bitcoin has benefited from its safe-haven status amid the Sino-US trade war. It jumped every time the tensions re-escalated. However, on Thursday, a Chinese official hinted that the country is looking to fix the situation with a calm attitude. This gave a boost to stock markets but put additional pressure on Bitcoin.

Gao Feng, a spokesman for China’s Ministry of Commerce, said:

We firmly reject an escalation of the trade war, and are willing to negotiate and collaborate in order to solve this problem with calm attitude.

Which of these reasons had the greatest contribution to the BTC price crash according to your opinion? Add your thoughts below!

The post 3 Reasons Why Bitcoin Price Has Crashed Today appeared first on Bitcoinist.com.

Sonny Singh of Bit Pay: It’s a Mistake Not to Accept BTC Payments

China to Launch Crypto; Analysts Say it May Hurt Bitcoin

Russia Moves to Recognize Crypto as a Form of Currency