It’s hard to currently find a hotter topic than DeFi (Decentralized Finance), which took the crypto world by storm during the last several weeks. While many are skeptical whether this current hype is justified, DeFi is aiming to become an even more significant trend in the upcoming years by bringing financial services to both the unbanked population and those that just don’t want to fall under the current restrictions of the financial world of the developed countries.

Neutrino Protocol is a price-stable cryptocurrency protocol that aims to take part in that revolution and this article is an introduction to the stable coin deployed on the Waves Platform. In the following weeks we will be explaining further details about Neutrino such as stacking and a more in-depth look into one of its tokens, NSBT, but for now let’s focus on how Neutrino became the most actively used decentralized applications built on Waves.

Why is DeFi so important?

“DeFi gives the ability to anonymously use financial services without restrictions and intermediaries within trustless decentralized networks with immutable storages.”

Whether DeFi is going to extend or replace traditional finance products is yet to be seen. What’s important right now is that the current situation makes it very hard for a large part of the world to become clients of financial services due to a number of restrictions and regulations. There are billions of unbanked people waiting to be discovered and to have their demand fulfilled. 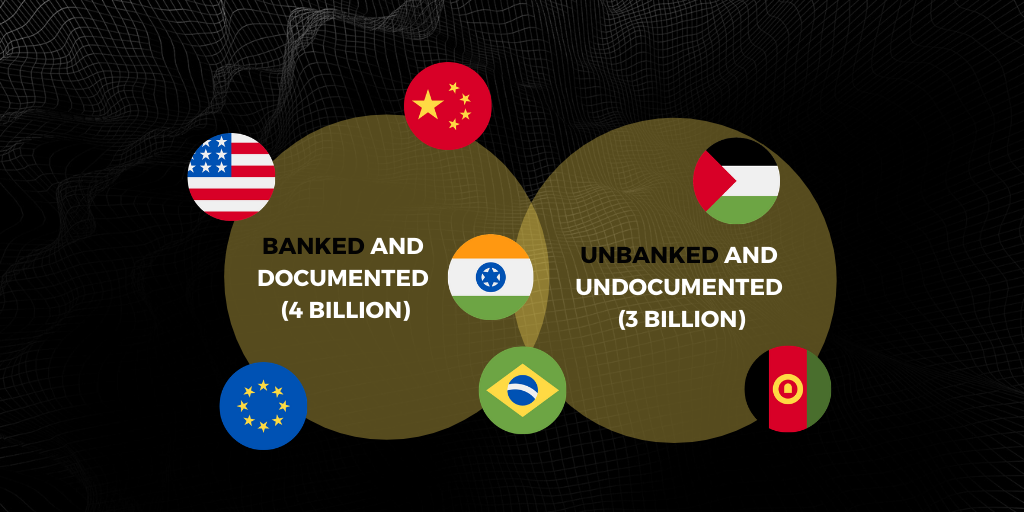 DeFi has a chance of completely changing how people are using financial services, both in the developing countries and those that already have infrastructure in place. It gives a freedom of choice without being limited based on age, credit history or nationality which not only gives individuals more opportunities but also works towards greater globalization where a person owns their assets without the need for an intermediary. There is no need for a KYC, the process is always transparent and because of the decentralised nature of the blockchain, it doesn’t involve expensive banks or advisors as a middle-man.

Cryptocurrencies, with Bitcoin being the first DeFi product, offer enormous potential to change the way people exchange value and data between each other but it’s not a secret that the majority of the current solutions are not ready for world-wide adoption. It is a speculation-driven market where the value of cryptocurrencies does not always reflect the quality of the product and the overall volatility doesn’t allow it to be a stable exchange medium. This is where stablecoins come into play.

“Neutrino Protocol is an algorithmic price-stable cryptocurrency protocol that allows for the creation of stablecoins tied to a specific real world asset, such as national currency or commodity, and collateralized by a native token.”

Let’s be honest – neither BTC or ETH in their current state are capable of being a proper everyday currency. They are too volatile, and the same rule applies to almost any other digital asset. Unless it is acceptable for your assets to lose 7% in less than a day, paying with cryptocurrencies would require constant attention to not be at a loss from simply holding it. 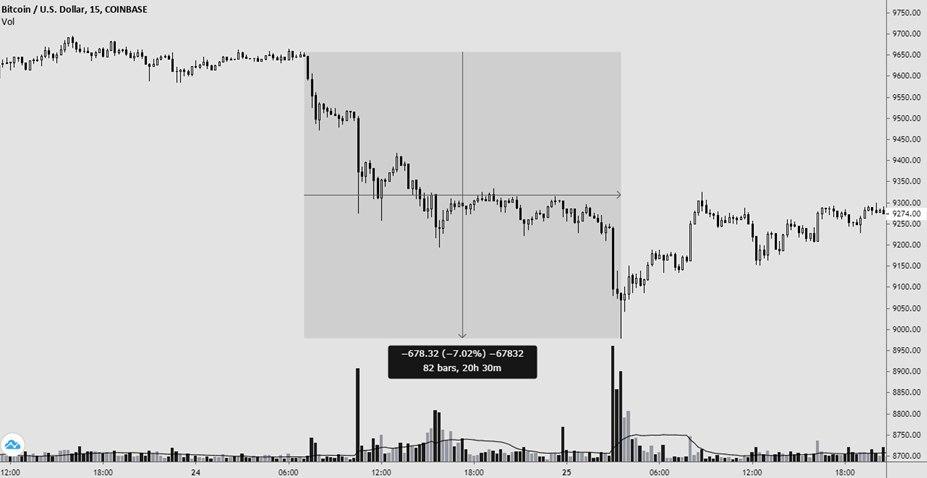 This is also problematic for retail merchants and dApps that require stability to focus on what’s important – development and adoption. The solution to that can be found in the form of stablecoins which recently got a lot more popular with several new players entering the market. The problem with many of them, including giants like USDT, TUSD or Gemini Dollars is that they still require users to trust the entities behind them which are often centralized and not completely transparent (remember Tether FUD?).

However, there is a new type of stablecoin that doesn’t use the fiat deposits as a collateral – algorithmic stablecoin, such as USDN (USD Neutrino) on Waves blockchain. Instead of using the fiat reserve strategy, the algorithmic approach uses native tokens of a public blockchain platform (e.g. WAVES, ETH, ATOM) and locks them up on a smart contract to serve the role of the reserve currency. What’s interesting here is the fact, that there can be a lot of different variations of that stablecoin as it depends on what kind of asset it’s going to be pegged to:

The exchange rate for all of these is determined by the set of offchain oracles.

(Price Oracles: a set of predetermined accounts providing a market price feed from several crypto exchanges into the blockchain.)

To make this system work, Neutrino Protocol introduces three types of tokens that are connected to each other via smart contracts.

“Neutrino stablecoin set-up combines algorithmic approach with a cryptocurrency backing. Since the exchange rate is provided through external oracles and the actual exchange of stablecoin to — crypto is executed at this rate, the issue that we need to solve is not the stablecoin price stability per se, but the price stability of the underlying asset.”

The main purpose of Neutrino is to achieve a balance between the value of the tokenized asset (for example USDN) and the value of the native token that works as a collateral (such as WAVES).

This model has 2 arbitrage opportunities which not only stabilize the whole system but also allow traders to profit from it:

Traders can exchange Waves tokens to USDN (via Neutrino smart contract) and afterwards sell that USDN on the exchange for a higher price. 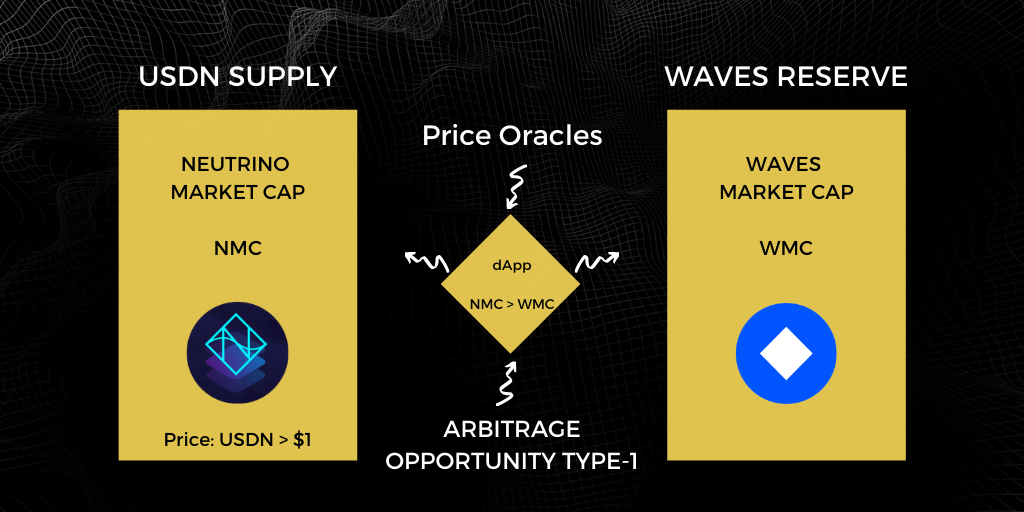 Traders can buy USDN on the market and exchange to Waves tokens (via Neutrino smart contract) to profit from the price differential. 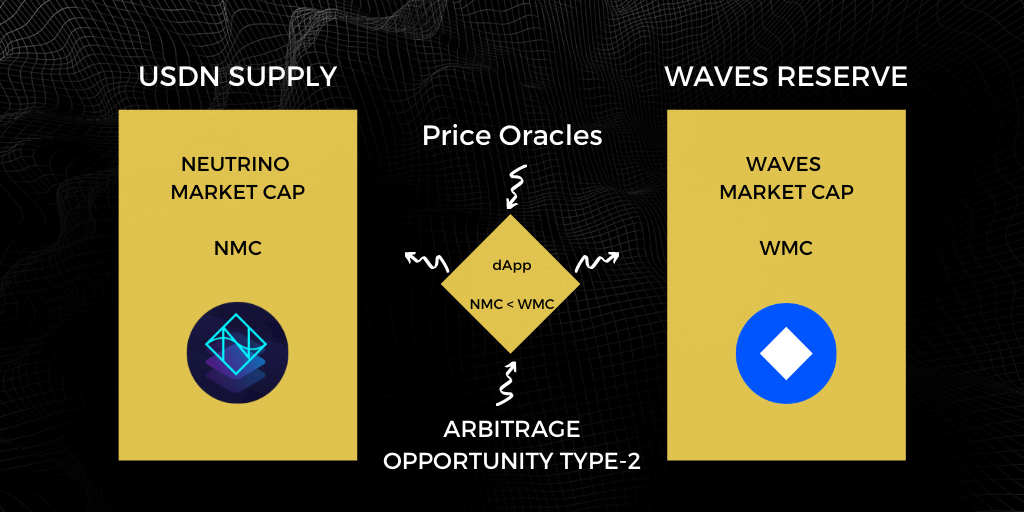 The exchange of the tokens takes place in the Neutrino dApp (https://beta.neutrino.at/) where thanks to the previously mentioned smart contracts and a network of oracles, users can create new Neutrinos by sending Waves tokens.

However, there are cases when the volatility is so high that these 2 methods are not efficient enough to keep up with the diminishing value of the asset that serves the role of a collateral. One of such cases can be a very rapid downtrend that Neutrino counters by the addition of a 3rd token – Neutrino System Base Token (NSBT).

Whenever the price of the collateral rapidly goes down, a smart contract creates NSBT tokens. Those tokens can be bought with USDN at any price (e.g. 20 NSBT for 10 USDN). When the price recovers, these tokens are liquidated in the proportion of 1 NSBT to 1 USDN. The NSBT tokens can be bought by traders on the open auction where the price is set according to their expectations. This allows for a speculative play by traders and makes the whole system even more secure as it allows to maintain the collateralization of the underlying assets. 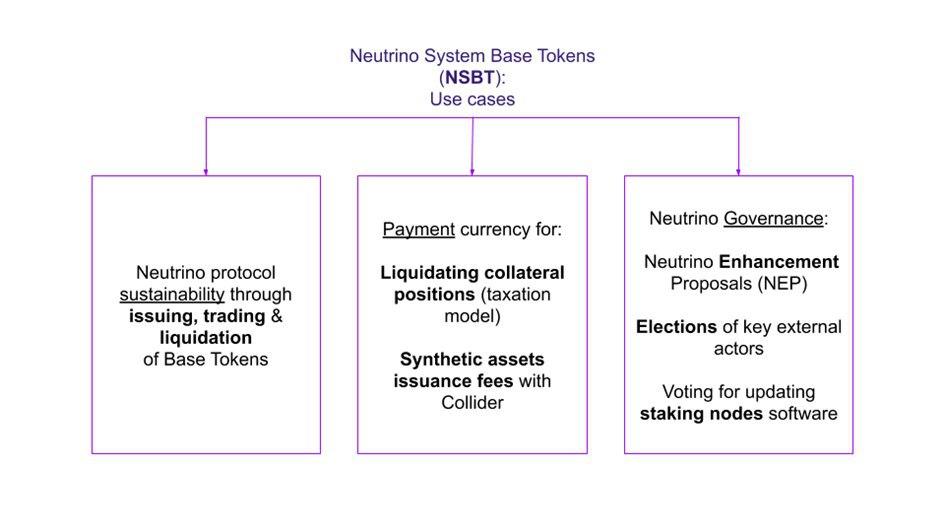 A more detailed explanation on NBST token with BR (Backing Ratio) will be available in a separate article.

Judging by the increase of popularity around DeFi and the level of development across the industry, it’s rather safe to assume that this trend is only just starting. The upcoming months will result in dozens if not hundreds of opportunities to participate in this (for now) small financial revolution and it’s up to the users to decide which way it’s going to go.

If that is the case, why settle for centralized solutions if you can help build that ecosystem together?

If you want to find out more about Neutrino’s future plans or its current functionality, see the links below and make sure you follow them on their social media channels:

Wells Fargo Warns Of Stock Shock From Biden Win, How Would Bitcoin Behave?

A $2B Gold Fraud Portrays Bitcoin as “Less Vulnerable” Alternative

Coti Network to be Listed on Bithumb Global