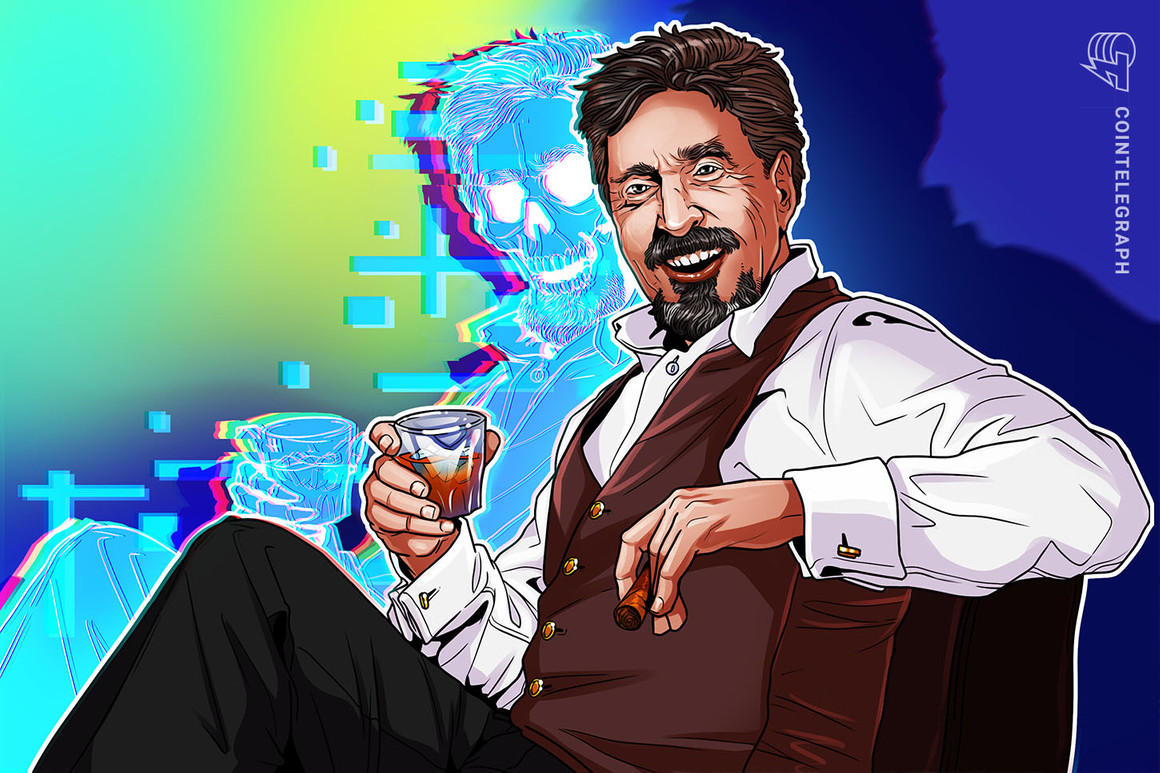 The former wife of crypto evangelist and computer programmer John McAfee has responded to a claim made by his ex-girlfriend that he faked his death and was currently in hiding.

John McAfee died in a Spanish prison cell[1] in June 2021 while awaiting extradition to the United States on charges of failing to submit tax returns from 2014 to 2018 and not reporting income related to pushing crypto projects and consulting work. He was 75 years old when he passed, and many in and out of the crypto space quickly developed conspiracy theories around his detainment and death.

In a Netflix documentary on McAfee’s life and death released on Wednesday titled Running with the Devil: The Wild World of John McAfee, ex-girlfriend named Samantha Herrera claimed to have received a phone call from the computer programmer two weeks after his reported passing:

“I got a call from Texas. ‘It’s me, John, I paid off people to pretend that I am dead but I am not dead. You’re only [the third] person in this world that knows that I’m still alive.’ And then he asked me to run away with him.”

Herrera did not provide further details in the documentary, but her claims cannot be independently corroborated at this time. Officials in Spain had been holding McAfee since October 2020, but he was still the subject of many allegations in the United States and abroad. McAfee himself had hinted that he might be targeted by U.S. authorities, posting a picture of a tattoo to his Twitter account in November 2019, claiming that “If I suicide myself, I didn’t. I was whackd.”

Getting subtle messages from U.S. officials saying, in effect: “We’re coming for you McAfee! We’re going to kill yourself”. I got a tattoo today just in case. If I suicide myself, I didn’t. I was whackd. Check my right arm.$WHACKD available only on https://t.co/HdSEYi9krq🙂 pic.twitter.com/rJ0Vi2Hpjj[2][3][4]

In a statement to Cointelegraph, Janice McAfee said she was not taking the claims in the documentary seriously:

“We are talking about John McAfee so anything is possible but the likelihood of him being in Texas and that being shared to the world in a Netflix documentary is unlikely. Texas is a great place but John was being held in a Spanish prison because of trumped charges against him from the IRS and the SEC, so I doubt he would choose to hide out in America.”

McAfee, whose software company was responsible for a well-known antivirus program that bears his name, often made headlines in the crypto space and mainstream media. In July 2017, he said that the price of Bitcoin (BTC[6]) would reach $500,000 by 2020[7], claiming he would “eat [his] dick on national television” if the prediction failed to pass. He ultimately did not honor this bet, and later said the crypto asset price would reach $1 million by 2021.

The U.S. Securities and Exchange Commission, or SEC, filed a complaint against McAfee and his associate Jimmy Gale Watson, Jr. in October 2020 for allegedly promoting an initial coin offering scheme. The District Court for the Southern District of New York subsequently found Watson guilty[8], imposing a cumulative fine of roughly $375,000. The SEC later dismissed all claims against McAfee as a result of his death.

During his time in prison from October 2020 until his death in June 2021, McAfee regularly posted updates from his Twitter account, initially saying he was “content” with his situation and had friends in prison, describing the conditions of his incarceration and the loss of his crypto holdings. Janice McAfee continues to post related news articles and retweets to her former husband’s 1.1 million followers.