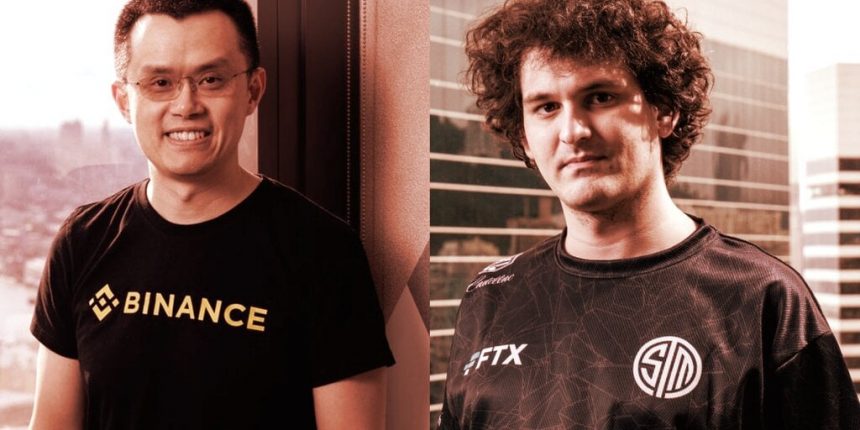 The deal does not include FTX US or Binance US, the separate U.S. operations of the respective cryptocurrency exchanges, Bankman-Fried said on Twitter.

“There is a lot to cover and will take some time. This is a highly dynamic situation, and we are assessing the situation in real time,” Zhao wrote on Twitter Tuesday morning. “Binance has the discretion to pull out from the deal at any time. We expect FTT to be highly volatile in the coming days as things develop.”

This afternoon, FTX asked for our help. There is a significant liquidity crunch. To protect users, we signed a non-binding LOI, intending to fully acquire https://t.co/BGtFlCmLXB and help cover the liquidity crunch. We will be conducting a full DD in the coming days.

The FTT token, which had slumped as low as $14.57 on Tuesday morning on rumors that FTX had suspended withdrawals, rebounded on the news. The token gives FTX users discounts on their trading feeds and referral commissions. Meanwhile Binance Coin (BNB), FTT’s utility token counterpart on Binance’s exchange, shot up 10% to $368.07 on the news of the pending deal.

If the deal proceeds, it will combine two of the largest cryptocurrency exchanges. As of Tuesday morning, Binance and FTX combined for $34 billion in trading volume—one quarter of all trades on centralized exchanges, according to data from CoinGecko.

Both Zhao and Bankman-Fried said that their respective teams will be conducting due diligence on the deal.

Bankman-Fried confirmed the agreement in his own thread on Twitter, saying that the two exchanges had agreed to a “strategic transaction.” He also addressed a withdrawal backlog, which appeared to be behind reports that the exchange had suspended withdrawals on Tuesday morning.

“Our teams are working on clearing out the withdrawal backlog as is. This will clear out liquidity crunches; all assets will be covered 1:1,” Bankman-Fried wrote. “This is one of the main reasons we’ve asked Binance to come in. It may take a bit to settle etc.—we apologize for that.”

Although both Zhao and Bankman-Fried have maintained that they weren’t sparring with one another, things have seemed contentious since the weekend.

Zhao announced on Twitter Sunday that Binance planned to liquidate its position in FTT, the cryptocurrency issued by FTX, a day after on-chain data showed that Binance had already moved $584 million worth of its FTT on Saturday.

The impact of the announcement was swift. In the past day, $1.2 billion worth of Ethereum and ERC-20 tokens have been withdrawn from FTX, according to blockchain data firm Nansen.

There’s been a $377 million decrease in stablecoin balances on FTX over the past two days, according to Nansen. That includes the USD Coin (USDC) balance on the exchange dropping from $164 million at the end of last week to $30 million on Tuesday, and its Tether (USDT) balance dropping from $140 million to $32 million over the same period.

Among the big withdrawals were crypto lender Nexo moving $201 million worth of Ethereum and asset manager Arca withdrawing 37 million ETH and 25 million USDT from FTX, according to Nansen.

Despite the seemingly contentious back-and-forth on Twitter, Zhao has maintained that the decision for Binance to liquidate its FTT was not an orchestrated play to spark fear, uncertainty and doubt—commonly referred to as the acronym FUD on Crypto Twitter—against his competitor.

“Funny memes, media & some people tried to color this as a ‘fight,’” he wrote. “Sorry to disappoint, but I spend my energy building, not fighting,” Zhao said.

Editor’s note: This article was updated after publication to add further details of the acquisition agreement.