The DeFi industry is potentially facing a new exploit less than a month after the $625 million hack on Axie Infinity.

According to crypto-twitter member @0revenue, Beanstalk DAO (Beanstalk Farms) has been exploited through a flash loan to the tune of $75 million. Furthermore, the perpetrator of the exploit might have orchestrated the exploit by initiating a proposal to ‘Give 250,000 Bean to Ukraine‘. 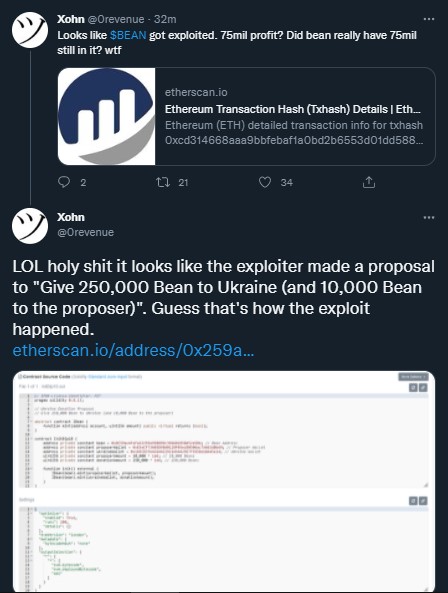 The team from PeckShield Inc, a blockchain and data analytics company, has also alerted BeanStalk DAO via Twitter, of the possibility of a flash loan on the protocol.

Hi, @BeanstalkFarms, you may want to take a look: https://t.co/wyHe3ARZgU

The transaction shared by PeckShield Inc. is the same one highlighted by crypto-twitter member @0revenue. To note is that there is no official confirmation from either PeckShield or BeanStalk DAO that the flash loan was executed to the tune of $75 million.

However, the transaction details indicate that the exploit could be around that figure as seen in the following screenshot.

Ethereum is Already Being Deposited to Tornado Cash

At the time of writing, the address used to exploit the BeanStalk DAO has an Ethereum balance of 19,955 ETH worth roughly $61 million. Moreover, the Ethereum seems to be in the process of being sent to the mixer service of Tornado Cash in batches of 100 ETH.

BeanStalk is a decentralized credit-based stablecoin protocol. According to the project’s whitepaper, it ‘uses a dynamic peg maintenance mechanism to regularly cross the price of 1 Bean (the Beanstalk ERC-20 Standard stablecoin) over its value peg without centralization or collateral requirements.’

Additionally, the Bean farm has two components: the Silo and Field. The Silo offers passive yield to the owners of Bean and other whitelisted assets. The Field offers yield opportunities to creditors known as Bean farmers for their work in maintaining the peg.

Binance pushes back against warning from South Africa regulator

Coinbase To Take DeFi-first Approach With its App and Wallet

Bitcoin Is Dropping, but This May Not Be a Bad Thing