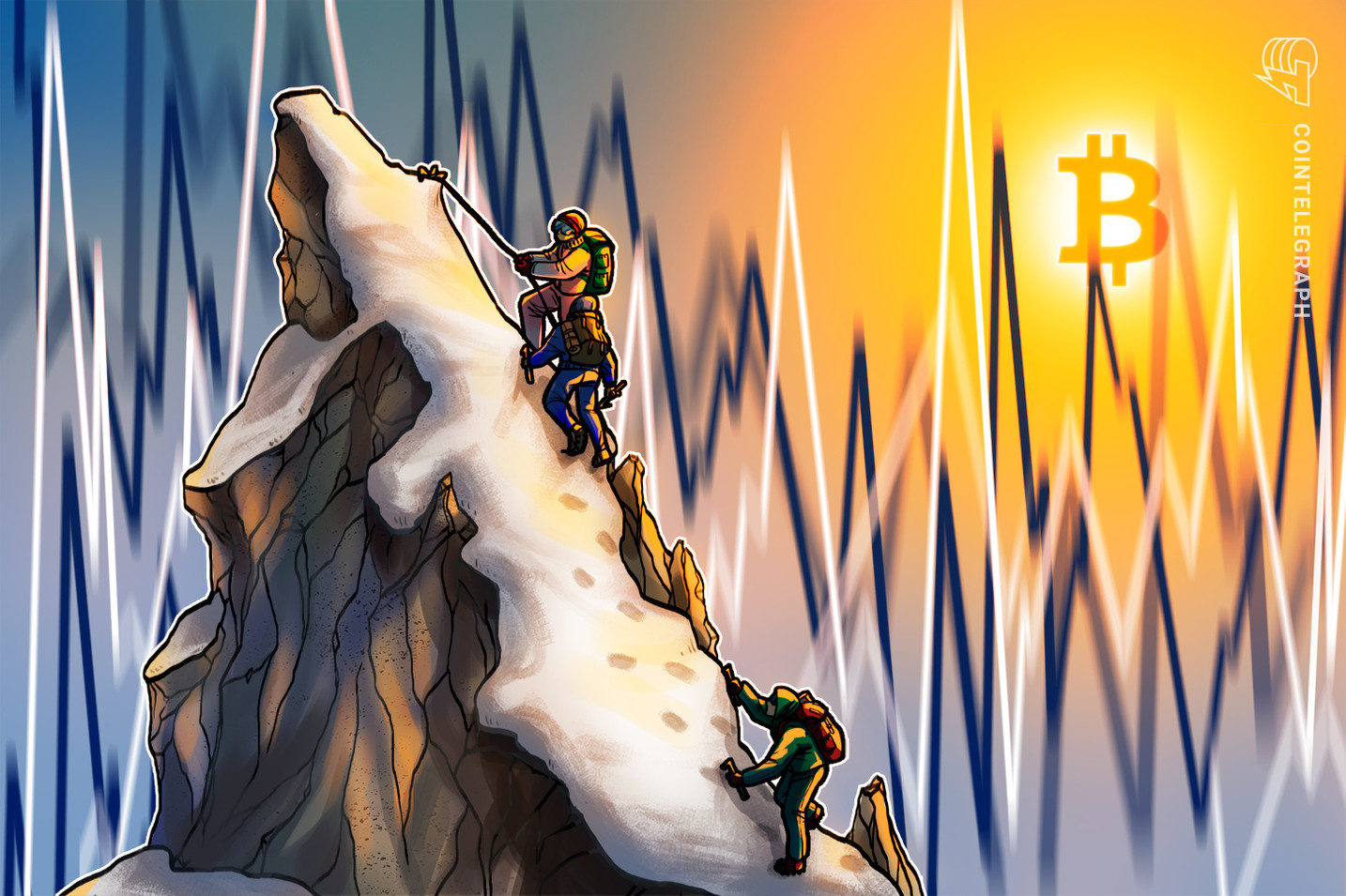 Bitcoin (BTC[1]) starts a new week and a new month on a cautiously positive footing after protecting crucial levels.

After an intense July in which macro factors provided significant volatility, BTC price action managed to provide both a weekly and monthly candle favoring the bulls.

The road to some form of recovery continues, and at some points in recent weeks, it seemed like Bitcoin would suffer even harder on the back of June’s 40% losses[2].

Now, however, there is already a sense of optimism among analysts, but one thing remains clear — this “bear market rally” does not mean the end of the tunnel yet.

As Summer 2022 enters its final month, Cointelegraph takes a look at the potential market triggers at play for Bitcoin as it lingers near its highest levels since mid-June.

In terms of Bitcoin’s July performance, things could have been a lot worse.

After June saw losses of nearly 40%, BTC/USD managed to close out last month with respectable 16.8% gains, according[3] to data from analytics resource Coinglass.

While those gains at one point passed 20%, July’s tally nonetheless remains Bitcoin’s best since October 2021 — before the latest all-time highs of $69,000 hit.

With solid foundations in place, the question among analysts is now if and how long the party can continue.

At the D, W, M close, BTC closed D red. W & M closed green and Trend Precognition fired a new Long on the M. It’s tentative until the candle closes, but the fact that it closed above the 50 Month MA makes it interesting to. Time to chill. Back to charts in the morning. pic.twitter.com/ImWjNcXx91[4]

“After monthly closed above 2017 all-time high from last cycle, price is slowly climbing up. Looks good so far and even if this is a ‘bear market,’ I’m happy to buy dips right now.”

Others were more cautious, among them fellow trader and analyst Crypto Tony, who noted that the recent local highs just above $24,000 were still acting as unchallenged resistance on the day.

“I am looking for a breakdown of this Bitcoin pattern and remain short while we are below the $24,000 supply zone we rejected off,” he confirmed[7] to Twitter followers.

Nonetheless, the weekly and monthly close sealed some important levels of support for Bitcoin. Specifically, the 200-week moving average flipped from resistance on the weekly chart, and BTC/USD retained its realized price, data from Cointelegraph Markets Pro[8] and TradingView[9] shows.

In its latest weekly newsletter released last week, Blockchain infrastructure and cryptocurrency mining firm Blockware also noted[10] that a reclaim of the 180-period exponential hull moving average (EHMA) at just under $22,000 on the monthly chart would be “quite bullish.”

“Monthly also appears to be reclaiming its 180-week EHMA, a level we’ve talked about over the last few months as a macro accumulation area for BTC. This closes Sunday night EST as well,” lead insights analyst William Clemente wrote:

“If it does reclaim, would be quite bullish as failed breakdowns/breakouts are a strong signal.”

The macro picture to begin August is one of relief mixed with a sense of distrust over how the rest of the year could play out.

In short timeframes, United States equities survived last month’s Federal Reserve-induced volatility to end July on a high. As Cointelegraph previously reported, calls for an extended rally in stocks[11] are increasing, something which could only be good news for highly-correlated crypto markets.

Analyzing the state of commodities, meanwhile, popular Twitter account Game of Trades predicted that oil would soon lose ground and that this would have a conspicuous impact on U.S. inflation.

Currently at more than forty-year highs[12], the Consumer Price Index (CPI) is responsible for the Fed rate hikes pressuring risk assets across the board. An about turn in inflation and thus Fed policy could thus swiftly turn the tables.

“Big sellers stepped in for oil on Friday,” one post from the weekend read[13]:

“Looks like oil is poised for a breakdown, taking the CPI with it.”

The global picture when it comes to commodities is not that straightforward, however, with macro analyst Alex Krueger conversely warning that Europe’s energy crisis had not yet played out in market pricing.

For Bitcoin, then, the current recovery is more a “bear market rally” than a true return to strength.

“Thing is if inflation comes down fast enough, which is feasible, and Europe’s energy crisis is not exacerbated by a harsh winter, also feasible, this could end up being the beginning of the bull market. Nobody knows as of now.”

Krueger added that the status quo should remain until “at least until the end of August” when fresh Fed events impact the market.

In order of importance, he listed the September key rate decision, September CPI, the Fed’s Jackson Hole summit on August 25 and the August 10 CPI print for July.

Most upcoming important events, in order:

Expect markets to de-risk (sell-off) the days before each event if market running hot into them.

Then of course we have the infamous ETH merge around Sep19.

Turning to U.S. dollar strength, the U.S. dollar index (DXY) remained at lows not seen for nearly a month on the day, currently below 106.

For Game of Trades, the index was more significant than the numbers. After its parabolic uptrend, a clear change of direction was now visible on the DXY daily chart.

“DXY has broken its parabola. There is only one way a broken parabola ends,” it commented[21].

Turning to on-chain signals, a rebound in one of Bitcoin’s core fundamentals has not been enough to convince analyst Venturefounder that the BTC price bottom is in.

Zooming out[22] to a multi-year view and comparing BTC/USD across market cycles, the popular content creator argued that Bitcoin’s relative strength index (DXY) is still suppressed after its peak in April 2021.

RSI measures[23] how overbought or oversold BTC/USD is at a certain price, and since May has seen its lowest readings on record.

Despite suggesting that Bitcoin is trading wildly lower than its fair value, RSI has yet to regain the “bullish momentum” that characterized the run past $20,000 and beyond at the end of 2020.

“Bitcoin and Altcoins RSI and bullish momentum peaked in April 2021 and never recovered for the rest of this cycle. Do you think we bottomed?”

BTC/USD, of course, never looked back, going on to reclaim its all-time high of the time around six months later.

Things could be looking up for institutional Bitcoin involvement as subtle signs of recovery[25] play out in statistics.

After its holdings suddenly declined by 50%[27] in June, the product is finally adding BTC again, suggesting that demand is no longer falling.

“Assets under management still far away from the all-time high, however,” he added[28].

The recovery trend is far from omnipresent, however. A look at the Grayscale Bitcoin Trust (GBTC) continues the troublesome trend of lack of demand.

The fund’s premium to spot price, long in fact a discount, is now circling record lows of nearly 35%, data from Coinglass confirms.

Grayscale continues legal action[29] against U.S. regulators over their refusal to allow a spot Bitcoin ETF to launch on the domestic market. GBTC would convert to such an ETF when conditions allowed.

It was a nice ride, but crypto market sentiment is already back in the “fear” zone.

The latest readings from the Crypto Fear & Greed Index[31] confirm that “neutral” sentiment could barely last a day, and that despite high prices prevailing, cold feet are hard to shake.

The Index measures 33/100 as of Aug. 1, still high compared to recent months but already considerably below the highs of 42/100 seen just days ago.

For research firm Santiment, however, there remains a cause for optimism. The firm’s proprietary metric governing transaction volume relative to overall network value for Bitcoin ended July in “neutral” territory of its own.

The network value to transaction (NVT) token circulation model[32], after printing bullish divergences in May and June, thus came through at the latest monthly close.

“With a neutral signal now as prices have risen and token circulation has declined slightly, August can move either direction,” Santiment summarized in a Twitter update about the latest numbers.