The Bitcoin Network is about to reach another hash rate milestone despite BTC falling more than $500 in a single day.

Data from Blockchain.com shows the Bitcoin Network hash rate currently at 114 quintillion hashes per second (114 million tera hashes per second — TH/s). This figure represents a new record for the computing power required to secure the network. 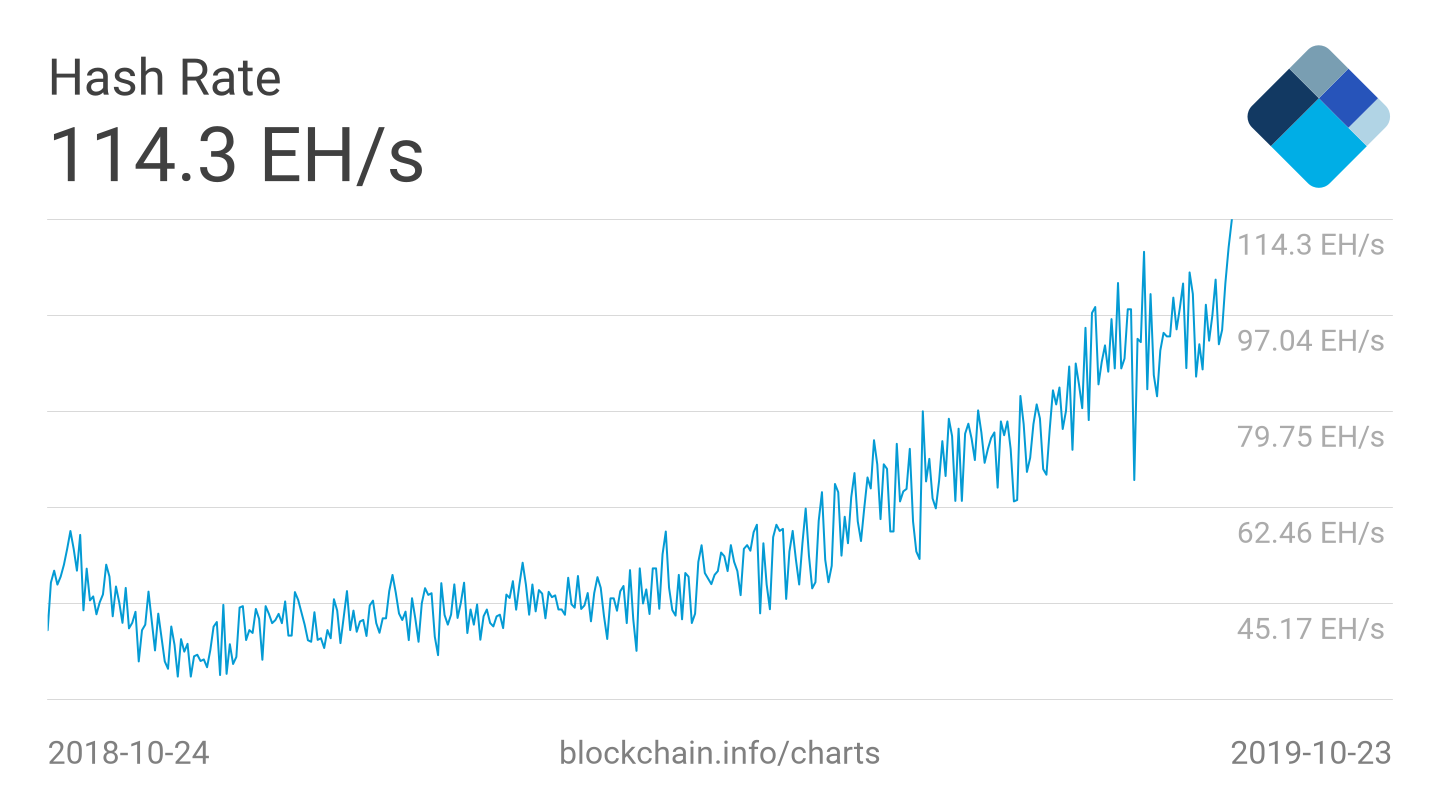 Since the start of 2019, Bitcoin’s hash rate has maintained steady growth regularly setting new highs. A look at the 7-day average figures shows that the Bitcoin hash rate has increased by close to 140% since the beginning of 2019.

The computing power increase looks to be bringing Bitcoin’s hash rate closer to a new milestone of 120 quintillion hashes per second. There is, however, some disagreement over how to measure the network’s hash rate.

Thus, it is common to see platforms providing different hash rate figures — Coin Dance shows the network’s computing potential already reaching 134 quintillion hashes per second earlier in the year. However, irrespective of the platform, the figures showcase the same trend — Bitcoin hash rate steadily on the rise since the start of the year.

The current hash rate spike will mean another upward difficulty correction. Bitcoin mining activity has experienced a resurgence since the 45% hash rate crash in December that sparked fears of a mining capitulation.

As reported by Bitcoinist, Bitmain is set to open a mega-mining facility in Rochdale Texas. The Bitcoin mining giant is the latest player in the industry to pursue further expansion of its activities with competition in the market becoming fiercer.

Strong fundamentals aside, the bitcoin spot price is still reeling from yesterday’s (October 23) $500 drop. The top-ranked crypto is now at its lowest price level in five months.

Smart money sold out in advance of today’s [Libra] hearings. Investors appear to have taken a cautious approach ahead of the hearing by limiting their exposure to crypto. We believe the price of BTC will remain under pressure for at least the next 24 hours, if not through Monday.

An earlier Bitcoinist report did note an influx of BTC movements into exchanges potentially signaling a massive sell-off. Meanwhile, James Bennet of Byte Tree says there has been a significant drop in Bitcoin network velocity as trading has swung towards Tether (USDT).

What is your end of year price forecast for bitcoin? Let us know in the comments below.

Why 99% Of All Crypto Assets Are Not Investment Worthy

Bitcoin, Ether To Be Regulated as Commodities by CFTC, per New Senate Bill