According to their analysis, Bitcoin is a potential savior in the current global financial environment of continual money printing. They explained this fact through the following statement and accompanying chart.

Bitcoin appears on track to becoming a globally accepted decentralized reserve and store-of-value asset that’s easy to transport and transact, has 24/7 price discovery and relative scarcity, and is nobody’s liability or project.

Diminishing quantity juxtaposed with the propensity of currencies to debase over time and the substantial amount of money being pumped into the system is a solid foundation for Bitcoin’s price appreciation. 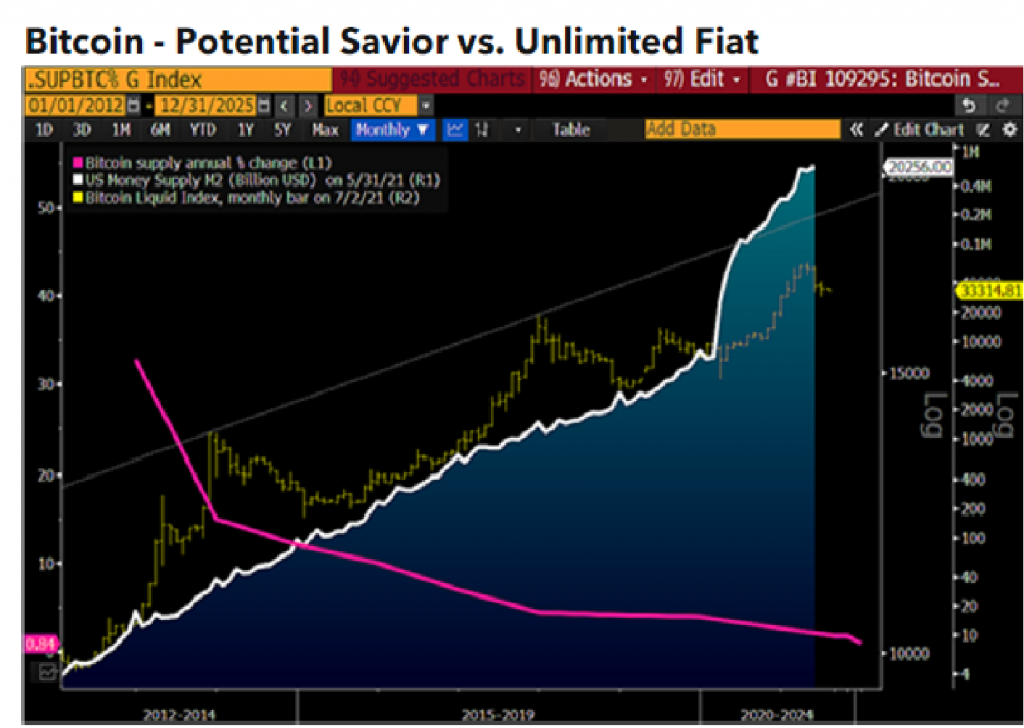 Bitcoin and Bonds Could Complement Each Other in Portfolios

The report by Bloomberg went on to point out that Bitcoin might ‘be a prudent addition to low-yielding bond portfolios’. This is due to the fact that the world is leaning towards a digital future and the upside potential of holding Bitcoin outweighs the risks of no exposure.

With respect to the ongoing Bitcoin mining crackdown within China, the team at Bloomberg pointed out that these events might result in short-term pain for longer-term gain. This is when viewed with the perspective that the U.S and other global jurisdictions, will now have a chance at embracing Bitcoin without the lingering fact that mining is controlled by one country.

Consequently, the Bitcoin mining crackdown in China will enhance decentralization and strengthen the BTC network.

Ethereum’s Death Cross Could be Averted by the Aug. 4th London Upgrade

Sam Bankman-Fried: Most Mainstream Assets and Crypto Are Related

Bitcoin Deposits on Coinbase will now Require only Three Confirmations

New Dash Payment App Is Accepted By More Than 150,000 Retailers

How Bitcoin Solves The Store Of Value Problem

If You Have A Bitcoin Miner, Turn It On

NFTs Could Be A Good Pathway To Draw Women Into Crypto, says Lavinia Osbourne