That was the conclusion of monitoring resource Byte Tree, which provided fresh data for the past 24 hours’ trading activity on Wednesday.

The theory offers a new perspective on the tumultuous week for Bitcoin investors. They watched as the largest cryptocurrency fell by up to 20% in hours.

According to Byte Tree, a transaction from a private wallet to an exchange worth $1.2 billion triggered the dip. The scale of funds at involved sparked a panic selling session. 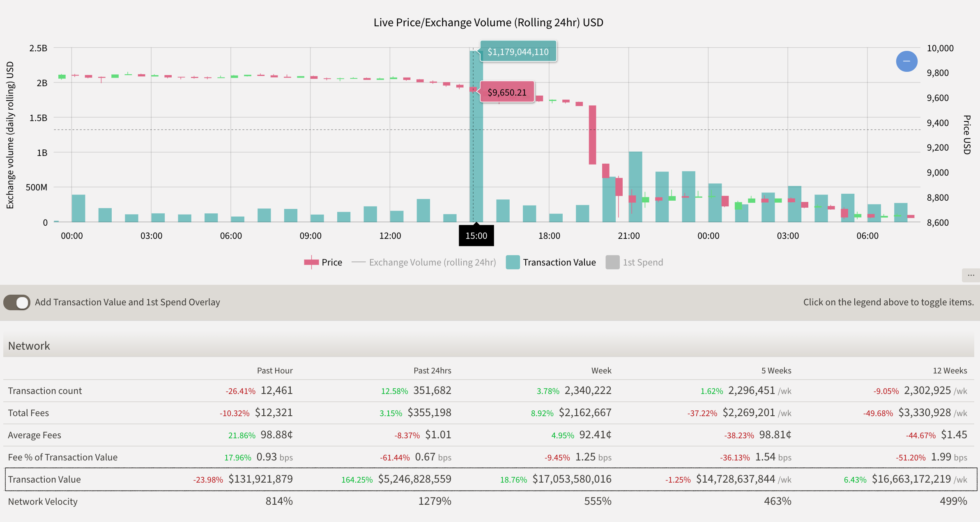 “In this case it looks like large transfers are made from wallets into an exchange, and subsequently sold,” officials commented in an accompanying Reddit thread.

In another comment, they added additional information about how the sequence of events took shape.

“Gradual build up of sells, minimal buys. Big on-chain movement of $1.2bn at 3pm BST correlates to accelerating fall in price (as the order book is eaten up),” they explained.

“It looks like this was ‘the tipping point’ that triggered short term panic.”

As trading statistics trickle through, other well-known cryptocurrency figures are dispelling myths that Bitcoin has lost technical stability.

Prior to the rout, Bitcoin’s network hashrate appeared to drop 40%. Initially, commentators suggested something was wrong, and that mysterious changes were taking place on a fundamental level.

This is a false narrative, others have countered. Hashrate in itself is immeasurable and data charts are only an estimate.

A drop in hashrate on the charts can occur as a result of slower block times and does not correspond to miners leaving the network.

“If you look at the popular hashrate estimate graphs you’ll notice that they spike hard both up and down. This doesn’t mean that the hashrate is rapidly growing or falling, it is simply a relic of the inherent variance in PoW mining.”

He added the idea hashrate charts can directly measure Bitcoin’s hashrate was a “surprisingly common misconception.”

At press time, traders still felt jittery about the short-term outlook for Bitcoin. BTC/USD trailed below $8400, down 14.1% on the day.

What do you think caused Bitcoin’s price drop? Let us know in the comments below!

When Bottom? Here Are The Top Bitcoin Price Predictions Today

PwC: More Than 80% of Central Banks Are Considering Launching a CBDC

Atari Is Set to Release Its Own Digital Currency

Coinbase SEC investigation could have ‘serious and chilling’ effects: Lawyer