There has been very little activity on crypto markets over the weekend. Since its big dump last week, Bitcoin price has recovered a little but remains rooted below five figures at the moment. Longer-term technical indicators are mounting up and they are mostly bearish.

Bitcoin spent most of the weekend flatlined at around $9,600. There was a brief dip to $9,450 on Saturday but it was recovered the hour after according to Tradingview.com. In early Asian trading today, BTC made a move higher to tap $9,800 but has retreated slightly holding the 00 price level at the time of writing.

The move has added just 1.4% over the past 24 hours and Monday morning is unusually quiet at the moment. Daily volume is still in decline and has dropped back to around $11 billion at the moment, its lowest level since April. 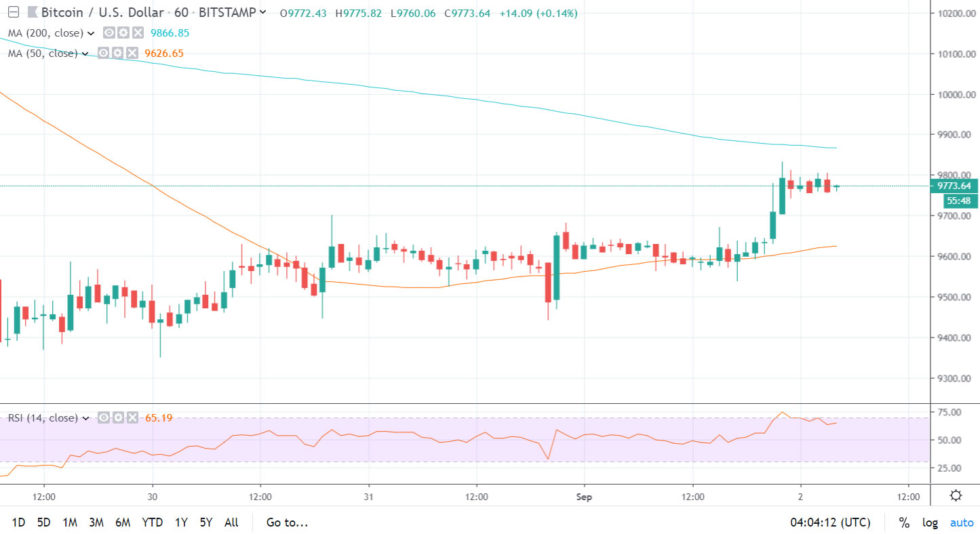 Trader and analyst Josh Rager noted that there have now been three red weekly closes in a row, and this has not happened since the November 2018 capitulation.

“Bitcoin continues to range in between weekly levels. Currently, the first time Bitcoin has closed red three weeks in a row since capitulation in Nov ’18”

Bitcoin continues to range in between weekly levels

Currently, the first time Bitcoin has closed red three weeks in a row since capitulation in Nov ’18

Until then, Bitcoin is sideways 🙂 pic.twitter.com/oFWuKDbNVg

For the next direction, he noted that resistance lies at $10,300 while weekly support remains at $9,400. The uptrend remains intact on this and the daily time frame but things are definitely slowing down. More consolidation is expected while bitcoin remains range-bound. The four-hour chart and one hour time frames are still bearish below the psychological $10k barrier.

The lack of volume is a clear indicator that traders are holding off at the moment, biding their time until there is another breakout.

The bitcoin lethargy has been shared with its brethren as there is very little action elsewhere. Trading engines are stalling as the week begins and total crypto market capitalization remains around $250 billion.

Ethereum has done nothing since its dump last week and remains flat at just over $170. Likewise with the rest of the top ten which have only made marginal moves in either direction over the weekend.

There are only a couple of low cap altcoins getting any action today with just four adding double digits. They are Wanchain, Enjin Coin and SNX and Bitcoin Diamond. The general feeling for the start of this week is bearish, however.

How long will bitcoin price continue to consolidate? Add your thoughts below.