Bitcoin SV (BSV) has held up pretty well in the middle of a global economic and health crisis. The fifth-largest cryptocurrency by market cap is up 90 percent on a year-to-date timeframe, has just undergone a pre-programmed supply rate cut, and is maintaining its medium-term bullish bias by holding key technical support levels.

But the metrics that typically make an asset reliably bullish are missing in the Bitcoin SV market. Here is a look at three issues that could spell trouble for the cryptocurrency in the near future.

In the first two weeks of April, Bitcoin SV was trading in the range of $141-209. And now, the range has reduced to $167-212, according to the Bollinger Bands (BB) readings of the daily chart. BB measures an asset’s volatility by referring to the gap between its two standard deviations. The more the gap, the higher the volatility.

But when it tightens, it means that the asset is trading in a tighter trading range. This trend typically leads to a price breakout.

A small amount of volatility typically is a piece of good news because it shows the asset is more stable. But in the case of Bitcoin SV, the indicator more or less suggests that the market is running out of steam – that a breakout to either side is possible once the Bollinger Bands Bandwidth near 0.10. It is at 0.24 as of this time of writing. 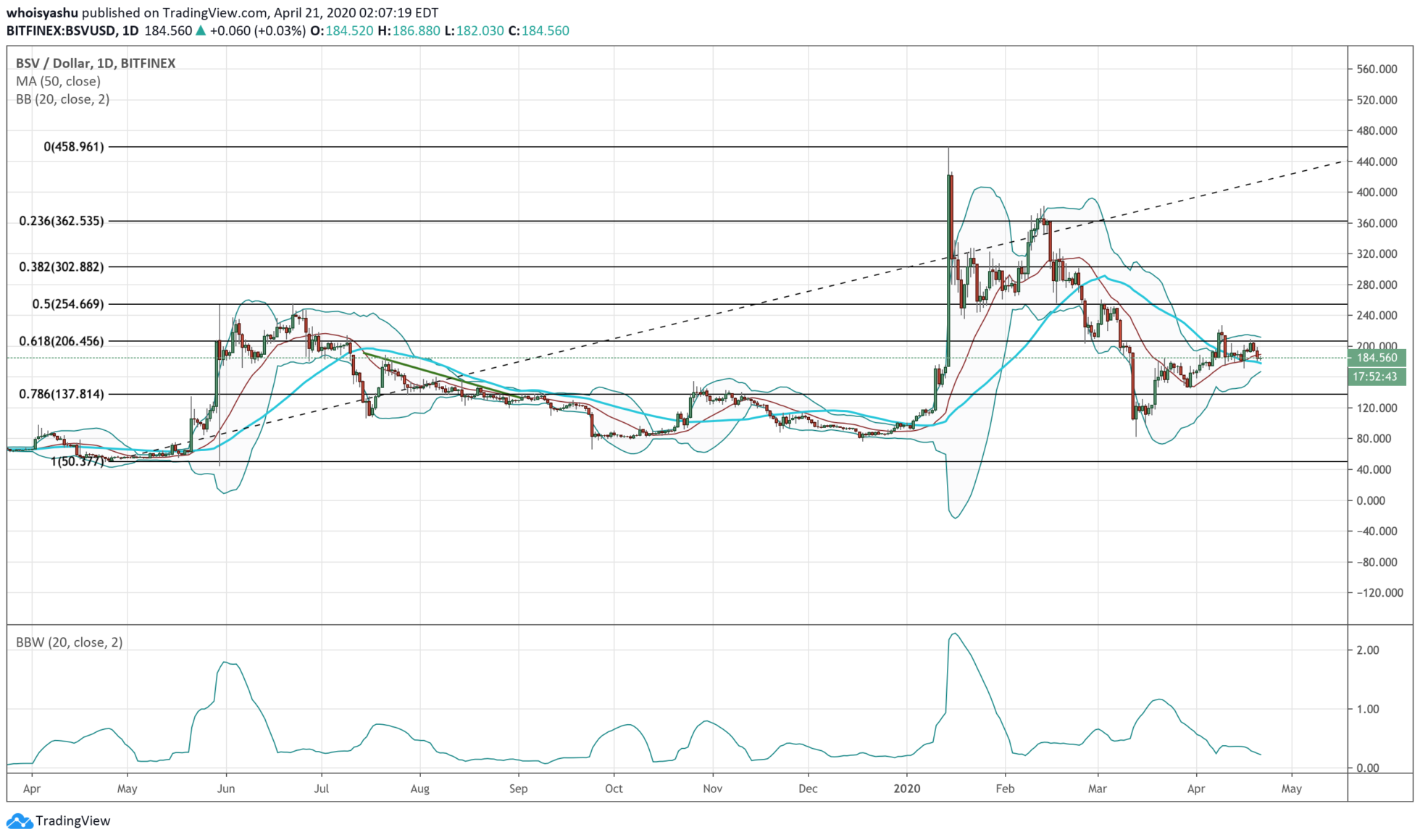 The possibility of Bitcoin SV heading downward is higher because of its poor market fundamentals. Its network’s hash rate – the measure of miners’ performance – has dropped significantly post reward halving. It shows that the Bitcoin SV blockchain’s reduced supply is hurting miners’ profits, prompting them to switch blockchains for better returns.

Bitcoin SV’s likelihood of undergoing a price breakdown rises further owing to its lower trade volume. It is a sign that traders are staying out of the market – and the ones who are maintaining BSV’s YTD gains are fewer in number. That said, the price is going up, showing a clear divergence. 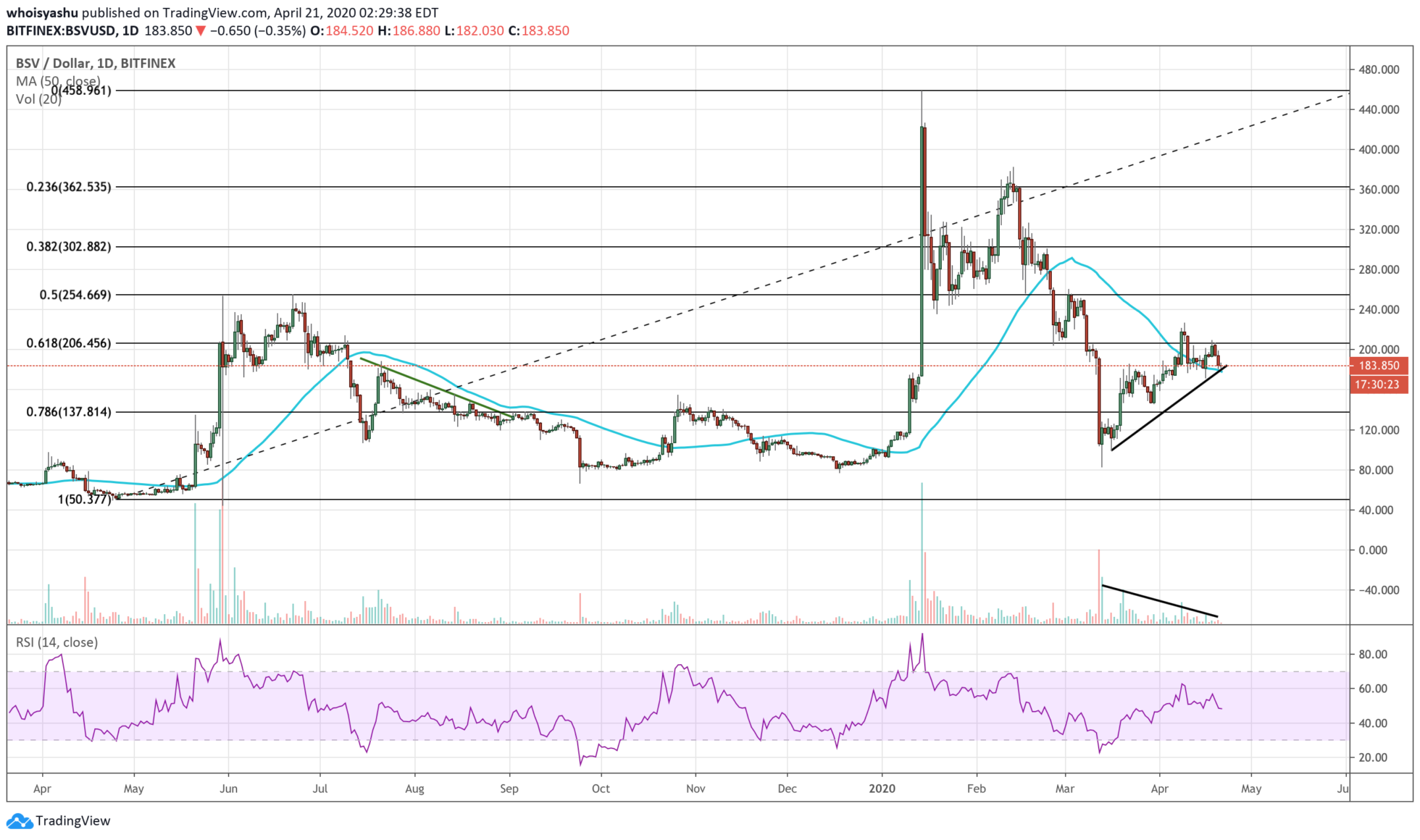 In a recovery market, lower volumes show that traders are concerned about a price top, which typically follows a correction. If a market is rising, a lack of long positions can result in low volumes. Traders believe that resistance has been established.

That puts Bitcoin SV at risk of witnessing sharper declines.

Last but not the least, Bitcoin SV could fall hard because of profit-taking. It is among the top crypto assets that are sitting atop attractive yearly gains – an ideal way to increase cash liquidity in times of Coronavirus.

Traders and investors could utilize the cryptocurrency to cover their losses elsewhere, leading to a sharp drop. The next downside target is at $137 – the 78.6% level of the Fibonacci retracement graph. For that, BSV needs to break below the blued 50-daily MA curve; it is behaving as short-term support.
Photo by Aaron Burden on Unsplash

Are Stimulus Checks Being Used to Buy Bitcoin?

Russia to Ban Facebook if US Blocks Libra Cryptocurrency

OKEx Head Taken Into Custody; All Withdrawals Are Suspended