BYOB: BE YOUR OWN BANK & PRIVATE KEYS 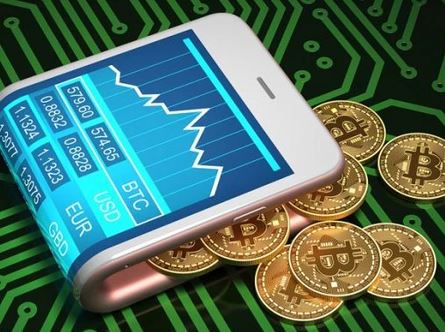 Your wallet generates an address on the blockchain (the ledger) that notes how many “coins” you have. That ledger is stored all over the world by people who are running software that stores the ledger. There are multiple copies of your address with your noted coins because there are multiple copies of the ledger stored all over the place. This is a security measure so that someone can’t just make changes to the blockchain and erase your address with its notation of your “coins.”

Having a distributed, decentralized ledger is what makes a cryptocurrency different. If a blockchain is centralized, if all of the computers (nodes) that hold a copy of the ledger are in one building or under the control of one person or one company, then your money isn’t secure because someone can change the ledger without your permission. True blockchains are decentralized to handle this issue.

There Are Multiple Blockchains

Every blockchain is its own ledger. Bitcoin is one blockchain (ledger). Litecoin is another. Dash is another. Bitcoin Cash is another. So is DigiByte. These are separate cryptocurrencies with separate blockchains (ledgers). These ledgers are really just a place to keep track of business transactions that are measured in “coins” or “tokens.” “Coins” or “tokens” are just numbers. If the Litecoin ledger (blockchain) says I have “5” under my address, people in the cryptocurrency world would say that I have five Litecoins.

There are many wallets that allow you to access each of those blockchains (ledgers). Right now, individuals and companies are in a race to see who can invent the wallet that will be used for mass adoption of cryptocurrency. People will be using more than one cryptocurrency, so they’re inventing wallets that allow you to access each of the separate blockchains within one wallet and even exchange one cryptocurrency for another within one wallet. Future money is a whole different ballgame compared to what it is at present.

Let’s See How It Works

I downloaded a DigiByte wallet (it’s free) onto my computer. The wallet is the software that allows me to access the DigiByte blockchain to “send” and “receive” DigiByte “coins.” What this really means is it’s the software that allows me to interact with the ledger so that the ledger will be notated when my address has more “coins” or less “coins,” according to whether I’m “sending” “coins” to someone or “receiving” “coins” from someone.

​Because this wallet is also a node, it took a long time to download. This is normal. My wallet is storing a copy of the blockchain (ledger). I’m participating in a bigger way when I download a “core” wallet. No one has to do this. You could download a regular wallet on your phone. A phone wallet doesn’t store a copy of the entire blockchain, so it’s a fast download. I chose to download a core wallet to satisfy my curiosity. I’m not advising anyone to do this. I’m simply taking you through the process of understanding how one becomes their own bank.

​My DigiByte wallet generates addresses for the DigiByte ledger. Here’s one address that it generated when I clicked on the “Receive” tab and pressed the “Request Payment” button: D5UpBDj1UDCX82QTYhZppchha8DHiXRP5B

​It also generated a QR code that your phone can read. It’s the same address. It looks like this: 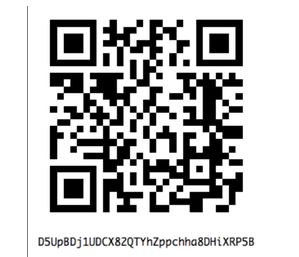 If you had a DigiByte wallet on your phone, you could scan this code and send me some DigiByte. You would scan the code, type in the amount you wanted to send me, click send, a miner would add that notation to the blockchain (it’s basically instant), and the transaction is done (you can then find it on the blockchain by looking it up). In one sense, the cryptocurrency system is very simple and direct (and addicting in its simplicity and directness).

Now, here’s something interesting to note. The transaction is public. All of the addresses on the blockchain (the ledger) are visible to anyone. At any given point in time, you could look up that address that I gave you above and see if I have any DigiByte on the ledger. Normally, you wouldn’t know that the address is mine because these addresses are just a bunch of numbers on the blockchain, but I’m telling you it’s mine, so now you know. Try it out here. The result should produce nothing because I don’t have any DigiByte under that address (unless some joker sends me some, and then you’d see that).

So, how do I keep someone from claiming that the above address belongs to them and all the “coins” notated under that address are theirs? How do I keep people from stealing my “coins?” This is where private keys come in.

A wallet produces two things: 1. A public address (it’s sometimes called a public key), and 2. A private key. I illustrated the public address above with that string of numbers and the QR code.

A private key looks similar to a public address. It’s a bunch of numbers generated cryptographically through your wallet. You can turn that private key into a QR code too. But where anyone can see your public address, only you have access to your private key. It’s what enables you to control your money because only the person that has the private key can interact with the public address for that key.

Only I can send and receive “coins” from that address above because that address is linked cryptographically to my private key. Your wallet interacts with that private key on its own to access your public address to add “coins” to it or send “coins” from it. You can find those private keys and print them if you wanted to do so. Some people do that. But here’s the thing, anyone that knows your private key can take all of the “coins” under that address.

So, there’s a massive privacy issue with being your own bank. This will probably be solved with some kind of easy-to-use biometric apps for your phone. However, between now and when that’s fully available, I believe it’s important that individuals understand that being your own bank means that you control your private keys.

Your wallet generates the private key, and that private key allows you to access your public address on the ledger (the blockchain) to send and receive cryptocurrency (“coins” or “tokens” or whatever other name is invented to label the amount noted under your public address). Your private key is what makes you your own bank. Let me say that again:

“Your private key is what makes you your own bank.”

Private keys are what make cryptocurrency different from digital money. If individuals don’t have control over their private keys, then it’s a form of conventional banking wherein others have control over your finances. With true cryptocurrency, others don’t control your money. Cryptocurrency is a permissionless system. No one can block you from participating in it. No one can hold up your money or tell you how to spend it or donate it or save it or whatnot. It’s not regulated.

“But they’re going to regulate it soon, aren’t they?”

No. They’re going to try to regulate it, but it’s already invented. People are already using it. Cryptocurrency isn’t asking for permission to exist, and no government is going to control it. It’s global. It’s not dependent on a governing body. It’s already here. People are building on it, and it’s growing at an exponential rate.

In essence, cryptocurrency is a reflection of changes that have already taken place in the way that the people view themselves and their future. They want systems that create access and thriving for everyone. In order for that to happen on a mass scale, everyone has to help everyone understand how to express greater power. Nowhere is this more evident than in the arena of finance. People need to share what they know about cryptocurrency with each other so that the individual sense of power, entitlement, and responsibility grows.

Very easy tools that allow people to be lazy about their money will be invented and adopted over the next few years. Because people don’t want to have to do the work to educate themselves about cryptocurrencies, there will be many companies, governments, and individuals that will take advantage of that fact and offer to take care of your “security” when it comes to your cryptocurrency. I see no fast and easy solution to this. It exists.

The best anyone can do is to get to know the fundamentals of this evolving sphere because it’s going to have a profound effect on the world. First and foremost, understand that no matter what anyone tells you, if you don’t have your private keys in your possession, if someone else is “holding” your cryptocurrency for you in any way or blocking access to a blockchain, they’re the bank, and you’re not dealing with a true cryptocurrency system. It’s business as usual being labeled a “blockchain” or “cryptocurrency.”

Being your own bank means that you have control over your private keys. You don’t have to do anything with this knowledge right now. Half of what I just wrote may seem like gibberish at this point. That’s okay. Store the knowledge away for future use. It will come in handy, I assure you.

How To Buy Bitcoin

Featured Getting Started
ByAuthor Game of CryptoPosted on August 8, 2019February 21, 2020

The complete beginners guide to Bitcoin