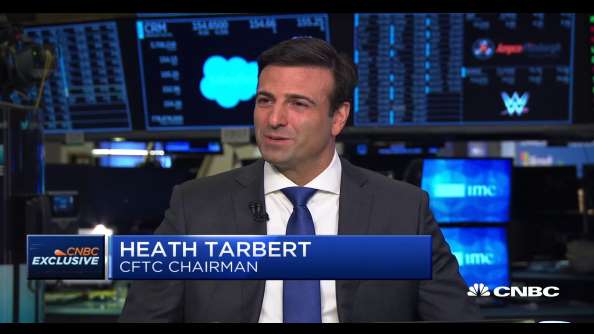 Heath P. Tarbert, Chairman of the U.S. Commodity Futures Commission says cryptos classified as security tokens can become commodities. The CFTC chief also revealed that Ethereum futures may hit the market within the next 12 months.

Crypto Transmutation from Security to Commodity is Possible

Speaking at the DC Fintech Week on Monday (October 21, 2019), Chairman Tarbert remarked that crypto designations into securities and commodities aren’t set in stone. According to the CFTC chief, a cryptoasset that’s considered a security can become a commodity and vice versa.

Furthermore, Tarbert revealed that other cryptos apart from Bitcoin and Ethereum might be labeled as commodities. As previously reported by Bitcoinist, the CFTC labeled Ethereum a commodity.

Tarbert also stated that the CFTC was looking into evaluating stablecoins as commodities. According to Coinmetrics co-founder Nic Carter, the CFTC Chairman did state that he wasn’t aware of any legal precedent for such a transmutation from security to commodity status.

For Tarbert, the U.S. Securities and Exchange Commission (SEC) is responsible for determining which cryptos fall under the securities classification. To this end, the CFTC chief remarked that market-led self-regulatory organizations (SROs) will not determine how regulators classify virtual assets.

Chairman Tarbert also restated his belief that Ethereum futures are imminent forecasting that hit the market in the next 6 to 12 months. Since the SEC separated bitcoin and ether as commodities back in 2018, there has been talk of launching ether futures in the U.S. market.

At the Yahoo Finance All Market Summit earlier in October, the CFTC chair praised the performance of the Bitcoin futures market.

Away from the security and commodity debate, Tarbert declared that crypto exchanges were still a “Wild West” arena. According to the CFTC chairman, there is still work needed to be done in sanitizing the crypto trading space.

In recent times, regulators have begun to insist on total compliance with measures like know your customer (KYC) and anti-money laundering (AML). These stringent measures have reportedly dampened retail trading in once buoyant markets like South Korea.

For many regulators, these robust regulatory provisions are necessary to prevent illegal financial activities.

What do you think are the potential implications of other cryptos being labeled commodities? Let us know in the comments below.

The post CFTC Chairman: Cryptoassets Other Than BTC and ETH Can Become Commodities appeared first on Bitcoinist.com.