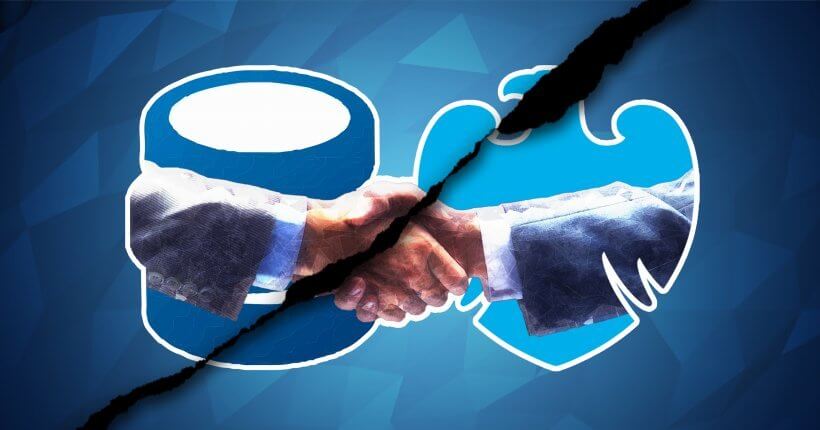 Some partnerships are not destined to last long, but in the case of U.S.-based cryptocurrency exchange Coinbase and the London-based banking firm Barclays, things are coming to an end just shy of the half-a-year mark.

In a recent statement, the banking company announced that it would no longer provide financial services to the popular trading platform. The partnership initially began in March of this year and is ceasing after only five months.

The U.K. is taking a rather strict approach to cryptocurrencies as of late, so this exit likely doesn’t qualify as “personal.” The nation, while examining ways to properly regulate cryptocurrency, has received suggestions from the Financial Conduct Authority (FCA) that crypto-based products should be banned, as they are too volatile and are therefore “unsuitable” trading opportunities for investors. Thus, the exit from the partnership could simply be in preparation for this.

Either way, Coinbase – given its size and popularity, especially with American investors – isn’t likely to remain in the dark for too long. The company should find a replacement soon, though there’s no doubt the maneuver is a major setback given how recent the partnership was formed. The joint venture allowed users to purchase digital assets with British pounds instead of American dollars. It also allowed them to withdraw funds quickly.

Sadly, many banks do not wish to do business with crypto-based ventures given that cryptocurrencies have long garnered a reputation for attracting criminals and malicious actors to the financial space. Fears of white-collar crimes such as money laundering still run rampant throughout regulators’ minds. Thus, crypto is a source of great distress for those examining the arena from a political front.

Several cryptocurrency businesses usually find themselves having to bank oversees due to the problems and issues associated with onshore banking services. Even crypto-related companies not directly involved in handling coins are required to seek bank accounts in outside areas. Crypto U.K. chair Iqbal Gandham says that the company he works with could not obtain the proper accounts with a U.K.-based bank. He asks:

We have got this traditional industry sitting there and saying they are not interested. We need to sit down and ask, ‘What do they want? What are they waiting for?’

The Second Hit This Week

Though no connection has been made yet, Coinbase U.K. recently announced that it would no longer be offering Zcash to its customers. This is the second major blow to the cryptocurrency exchange to involve British-based legislation and banking services, and many are wondering if the streak is likely to continue.

At press time, cryptocurrencies are largely unregulated in the U.K. and in most of Europe, but Coinbase provides many traditional banking products to 23 European countries. Many thus use Coinbase to deposit and withdraw fiat rather than digital coins.

The post Coinbase and Barclays Partnership Is No More appeared first on Live Bitcoin News.