It’s been a strong few weeks for Ethereum adoption. Due to growth in the decentralized finance sector, the blockchain has seen a spike in users, active addresses, and transactions.

Unfortunately, this influx of usage has not come without a cost: As per data from Glassnode, a blockchain analytics firm, the daily median gas price of an Ethereum transaction passed 50 Gwei. This is a transaction cost five times higher than that of April, and the highest reading in almost two years.

The daily median gas price has increased by more than 5x since April, surpassing 50 Gwei yesterday for the first time in almost 2 years.

While some may see increased usage as bullish for Ethereum, some aren’t too sure that this is the case.
It’s Bearish for ETH

Some analysts and proponents of the network believe that high transaction fees could be the cause of Ethereum’s downfall in the longer run.

Qiao Wang, a former head of product at Messari and popular crypto analyst, recently said on the matter:

“So long as ETH 2.0 is not fully rolled out, there’s an obvious opportunity for a highly scalable blockchain to dethrone Ethereum. Paying $10 transaction fee and waiting 15 seconds for settlement is just bad UX.”

I've changed my mind after using a dozen of Defi platforms. So long as ETH 2.0 is not fully rolled out, there's an obvious opportunity for a highly scalable blockchain to dethrone Ethereum. Paying $10 transaction fee and waiting 15 seconds for settlement is just bad UX. https://t.co/vXAAFET3YK

It isn’t only Qiao Wang who has noted that high Ethereum gas fees threaten the viability of ETH as an investment.

“The issues inherent in gas costs have created congestion, which is a negative network externality. Congestion on Ethereum has led to poor user experience, especially for traders in this highly volatile environment, as their leveraged positions may be liquidated before they can act.”

Joseph Todaro has echoed this, writing that he thinks that as transactions fees “skyrocket,” “Scalability will raise its ugly head once again.”

“For awhile the dark horse goes unnoticed. It doesn’t yet have its army of shillers who will provide warm feelings of confidence and certainty of success. But they are coming. […] It is time, once again, to look at the neglected and scorned ETH competitors.”

Not to mention, there’s also a bearish technical case for the asset

One trader shared the chart below on July 18th, showing that the leading cryptocurrency remains below crucial resistance levels. “Time to go swing short on ETH, ” he said, noting that the asset is likely to undergo a rejection at current levels.

To him, Ethereum falling very close to $200 is the scenario that is likely to play out. 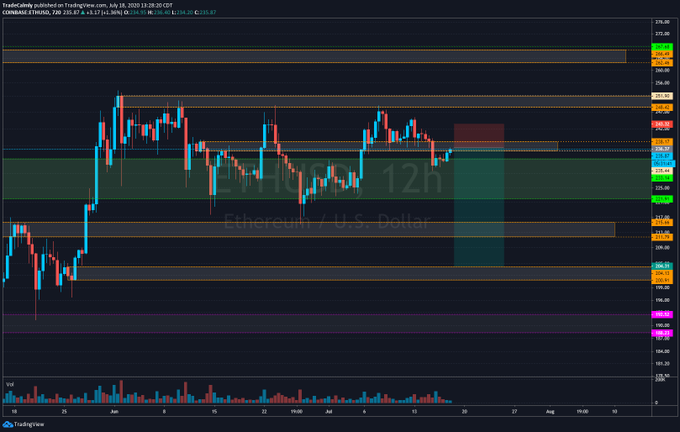 Analysis by trader “Calmly” (@im_calmly on Twitter)
This has been corroborated by another cryptocurrency trader, who shared that Ethereum is currently trading below a crucial diagonal that was formed in May. The loss of that diagonal, coupled with ETH sliding below crucial moving averages, implies that a correction to “$205-215” is “likely.”

Featured Image from Shutterstock
Price tags: ethusd, ethbtc
Charts from TradingView.com
Ethereum Fees Are Up 500% Since April: Why That’s Bearish for ETH

Bitcoin Halving is Less Than 10000 Blocks Away, Will Prices Soar?