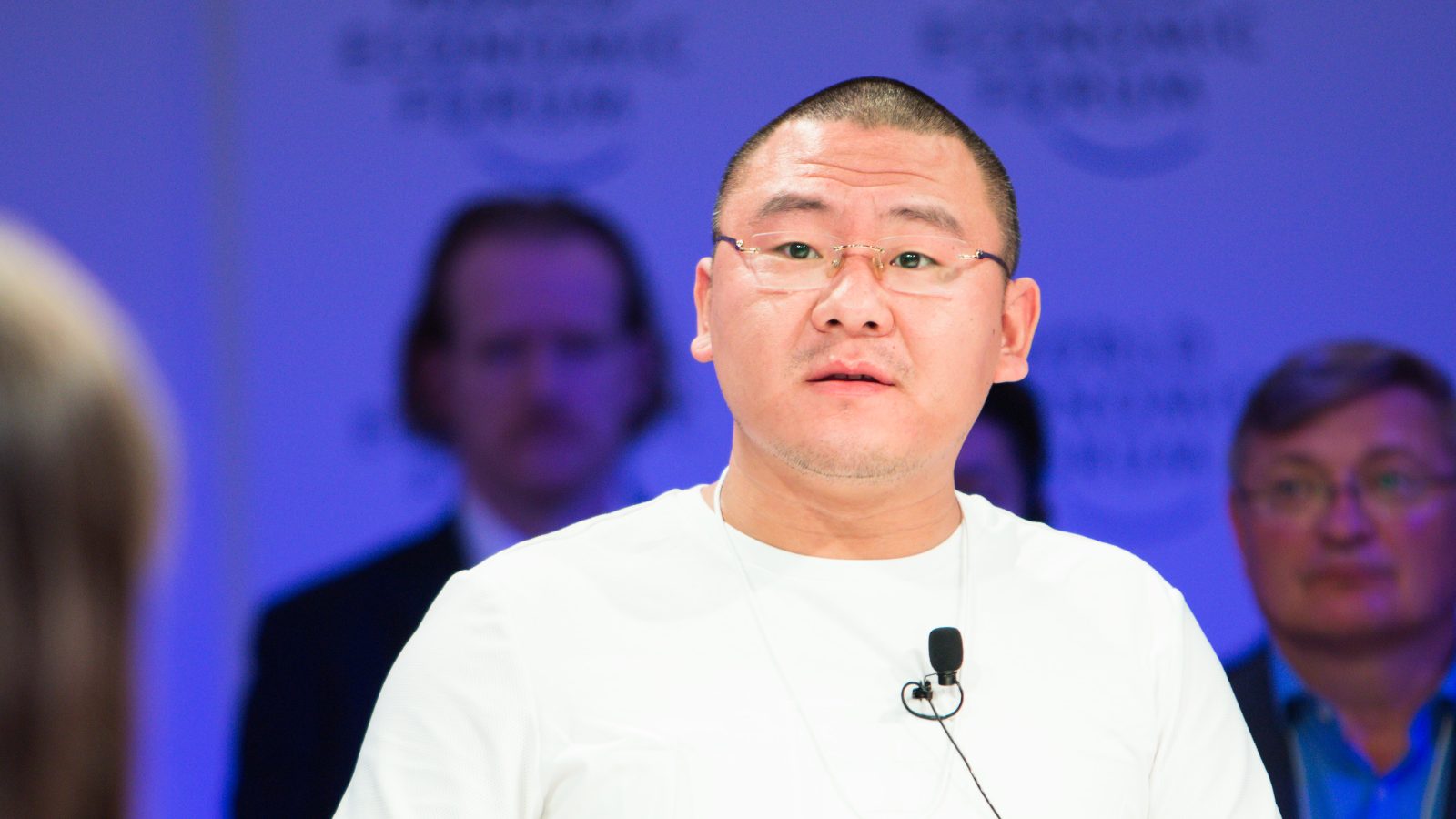 Born in rural China, home to blue-collar trades and untold acres of farmland, Guo has cultivated a notable crypto following from his humble roots in a province known for coal mining. The high school graduate — he never went to college — has been an early ether miner. He’s helped initial coin offerings (ICOs) get off the ground, and he’s backed a slew of startups that went on to alter corners of crypto itself.

And he’s sold meat on the streets.

Guo gained prominence, and notoriety in certain circles, for pushing hard for Ethereum Classic, which emerged when the blockchain protocol hard-forked the first time after hackers absconded with tens of millions of dollars from what was then the world’s largest DAO.

That position, he told Blockworks, was the wrong one in hindsight. Ethereum Classic is trading around $40, a fraction of ether’s $1,800, according to data compiled by Blockworks.

In cryptocurrency, a hard fork occurs when a significant disagreement over a protocol’s function triggers a rival faction to start its own blockchain, with its own rules.

Guo is betting his latest contrarian stance — that Ethereum should fork once more, ahead of the network’s looming Merge from proof-of-work (PoW) transaction validation to a proof-of-stake (PoS) mechanism  — will lead to a more favorable outcome, he told Blockworks.

“There is still a 90% chance this will not succeed,” Guo said. “Forking ETHW will not be as easy as forking ETHC.”

The movement to transition Ethereum away from proof-of-work isn’t new: There were rumblings among the then-handful of developers to make a drastic shift to proof-of-stake as early as the start of 2016.

A single ether transaction on proof-of-work consumes the same amount of energy as the average US household in one week — the carbon footprint equivalent of watching over 20,000 hours of Youtube.

Proof-of-stake protocols, meanwhile, such as Solana and Near, rely on stakers who lock up their digital assets to secure their respective network. They also massively reduce crypto mining’s environmental impact and waste compared to PoW blockchains.

After briefly chatting with Ethereum founder Vitalik Buterin when he visited the United States in 2016, Guo learned the Merge was not likely going to happen any time soon.

He then decided to take a risk.

He purchased much of the mining infrastructure on the market, plentiful and available for cheap at the time — eventually scaling his mining operations in China. Guo worked as a miner for around a year before Ethereum was struck by the DAO hack, which brutally — and, in some cases, permanently — divided the ecosystem.

At the time, many miners were in favor of “rewriting history,” a sentiment shared by Guo. Rewinding the clock and essentially restarting the blockchain before the hack saved ether holders at least $60 million at the time, when the cryptocurrency was trading much lower.

It wasn’t until Barry Silbert, founder and CEO of digital assets-focused venture capital firm Digital Currency Group (DCG), came to Guo and asked him to “think about it clearly” did Guo begin questioning whether the drastic move was such a good idea to begin with.

Unsure of which side to back, Guo took his dilemma to a group chat populated by Chinese Ethereum miners and other industry participants. When rumblings of his Ethereum Classic leaning bubbled to the surface, Guo was kicked out in short order.

“It was after that incident that I publicly announced my support for Ethereum Classic,” Guo said. “I sold all my Ethereum and moved it to Ethereum Classic — though, looking back, that was the wrong decision, because ETC doesn’t have much value now and ETH has grown significantly.”

After 2017, Guo completely stopped all mining and began focusing on organizing ICOs for blockchain companies.

Afterward, Guo decided to host a party in his Silicon Valley home. A number of prominent Chinese miners attended. And he learned firsthand, for the first time, of their plight.

After being forced to relocate from China to the US following the Chinese regime’s crackdown on crypto, miners struggled to make ends meet. Many miners were on the verge of bankruptcy, Guo said. They had invested a large amount of their money into setting up mining facilities and had virtually nothing to show for it. They had, in many cases, only debt.

“Initially I didn’t plan to help them,” Guo said. “Forking Ethereum would require a lot of developers, and if it were just a chain, it wouldn’t be so different from Ethereum Classic.”

He decided to make a post on his WeChat “moments” — soliciting opinions on the blockchain’s proposed, and pending, move.

“This one post really changed everything,” Guo said. “It was like the butterfly effect. I received over 50 calls from Chinese miners, telling me how if Ethereum were to move to PoS, they would never be able to earn back the money that they had already invested into the infrastructure, and many of them would have to file for bankruptcy.”

A number of miners urged Guo for help, including sourcing sought-after and elusive developers who would continue building proof-of-work layer-2s and related secondary functions on proof-of-work after the Merge.

“Since I was a crypto miner myself, I understood where they were coming from,” Guo said. “I thought I should step up and help them organize this [hard fork].”

Guo turned to aWSB, a predominantly Chinese crypto community, asking if any developers would be interested in supporting an Ethereum hard fork. The Hail Mary effort led to around 60 volunteers.

The longtime crypto investor — Guo has backed a number of bitcoin projects, in addition to his substantial Ethereum stakes — said he’s well aware that the growing decentralized finance sector and stablecoins will move to proof-of-stake. But he said he’s in touch with at least one company planning to launch a stablecoin on the proof-of-work version if it’s successful.

Even if the stablecoin bid fails, Guo said that the network’s gas fees would keep the fork afloat.

“Similar to how DogeCoin doesn’t have ERC-20 and doesn’t have NFTs —it still has a significant user base,” Guo said.

Even if the new chain lacks smart contracts, the coin’s value is still likely to be higher than Doge.

“User base is what determines value,” he said.

Guo has not been the only person advocating for the shift. Tron’s controversial founder, Justin Sun, has publicly backed the endeavor. Sun did not return a request for comment.

If the fork works, Guo plans to hold his ETCW — or whatever the new network christens its flagship token — at least until the next bull market before selling.

“A lot of people buy cryptocurrencies just to make money,” he said. “But Ethereum PoW is different; if it is successful, it will still have all the smart contract capabilities that developers can build on.”

Debates have raged on crypto Twitter around how miners in favor of a hard fork are already reaping its presumptive benefits. But Guo said those rewards have not yet been able to cover the mounting cost of setting up power-hungry mining facilities.

“If the value of ETHW increases, then miners will at least cover their initial costs,” he said. “Of course, if the value doesn’t increase, then they will lose money — but, if they don’t even try to fork Ethereum, then they will definitely go bankrupt.”

Most people in crypto, of course, are not miners.

“And, because of that, they don’t care what happens to miners once Ethereum moves to proof-of-stake,” Guo said.

In his view, leaving miners behind — and moving the vast wealth they made possible to the new chain — is “irresponsible” at best.

Because many miners have not yet been able to turn a profit, Guo said it has been difficult to raise needle-moving funds to continue building a proof-of-work system that can actually operate after the Merge.

“If it does fail, I don’t think people should be surprised,” he said. “Maybe the guy selling beef should just go back to selling beef and not get himself involved.”

This interview was conducted in Mandarin. Quotes in this article have been translated from Mandarin to English.

The post Ethereum Fork May Be Doomed To ‘Fail,’ but Chandler Guo Is All In. Again. appeared first on Blockworks.