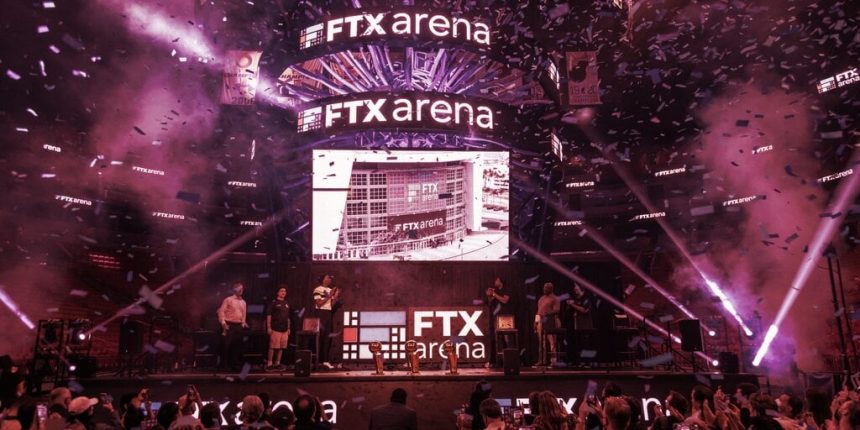 SHARE
Contents
$375 million at a minimum in sports commitments—now what?Stay on top of crypto news, get daily updates in your inbox.

Crypto derivatives exchange FTX launched in 2019 and soared to a $32 billion valuation in just three years—now the rocket ride is ending in Chapter 11 bankruptcy.

Along the way, the company—flush with trading fee revenue from the mainstream crypto boom during the pandemic—spent big on sports marketing deals to raise customer awareness.

In the second half of 2021 alone, FTX and/or FTX US signed deals with the NBA’s Miami Heat (stadium naming rights), Major League Baseball (as the official crypto exchange, a deal that put an FTX logo patch on every umpire’s uniform), the Golden State Warriors (in-arena signage at the Chase Center and brand placement with the Warriors’ G League team), the Washington Wizards and Capitals (official crypto exchange and NFT partner), and esports giant TSM (naming rights).

The Miami Heat deal, the most high-profile of them all, was a 19-year, $135 million contract. In an interview with Decrypt in May 2021, Bankman-Fried confirmed those numbers.

When asked how a company that hadn’t even existed for three years could sign a 19-year contract, Bankman-Fried grinned and said, “Without going into the details, it’s been a pretty good year for us. To the point where, frankly, we don’t need to rely on the other 18 years to have the funds for this.” (It is unclear whether FTX actually did pay the full Heat contract upfront.)

Also in the hoops world, FTX’s multi-year deal with the Warriors was comparatively modest, with a CNBC source valuing it at just $10 million. Terms of the deal with Monumental Sports and Entertainment for the Wizards, Capitals, and WNBA’s Washington Mystics were not disclosed.

FTX’s 10-year deal with TSM was its richest disclosed sponsorship, as Bankman-Fried—a noted League of Legends enthusiast—inserted the exchange’s brand into the team’s name (now TSM FTX) at a total price of $210 million. The exchange continued its esports spending spree with a seven-year pact with Riot Games to sponsor the League of Legends Championship Series (LCS) esports league, although the companies declined to disclose terms.

It’s unclear how much FTX US spent on a multi-year deal to sponsor Comcast-backed esports platform Nerd Street Gamers, while a recent one-year sponsorship of Brazilian esports team Furia reportedly set FTX back $3.2 million. The growing esports industry is still heavily dependent on sponsorship funds, which has made crypto firms appealing backers in recent years. The loss of FTX funding could significantly hurt those partners.

FTX US invested in college sports, too, putting up $17.5 million for a 10-year stadium naming rights deal with the University of California’s Golden Bears. The deal was paid for entirely with cryptocurrency, according to the team’s official announcement.

Terms for the prominent Major League Baseball deal were never disclosed, nor were terms made public for FTX’s deal with popular Formula One team Mercedes-AMG Petronas.

$375 million at a minimum in sports commitments—now what?

Just the publicly reported price tags listed above add up to commitments of more than $375 million—and that doesn’t include any fees given to any of those pro athletes, since they weren’t publicly disclosed.

Now the empire is crumbling.

The F1 racing organization already announced today that it is suspending the deal and will remove FTX branding from its car as the current season winds down.

It looks highly unlikely the FTX name remains on the Heat arena for much longer, and not only because the company has gone under but because the brand value has been destroyed, and the hyper-brand-cautious NBA may wish to distance from it. It’s also difficult to imagine the FTX patch remaining on the umpire uniforms when the next baseball season opens.

To be sure, FTX is far from the only crypto exchange to go on a sports marketing spending spree during the pandemic, while crypto was booming. Coinbase, Crypto.com, Binance, and OKX all signed pro sports sponsorships or sold NFTs tied to a sports star or team, and crypto ads flooded the airwaves during Super Bowl 56 last February. (Crypto.com is sponsoring the 2022 World Cup in Qatar, and its naming rights deal for the L.A. Lakers arena dwarfs the FTX/Heat deal at $700 million.)

In hindsight, it’s easy to question FTX’s rampant marketing spending—and many critics are.

But in January, when asked on Decrypt‘s gm podcast whether there were any signs the sports marketing push was working, Sam Bankman-Fried said no—no data, at least. But anecdotally, he argued, it was amplifying FTX’s brand awareness: “Everyone we talk to who knows us—a little bit, a lot, barely, intimately—this is top of mind for them,” he said. “Clearly, this has penetrated more than everything else we’ve done combined, in terms of people’s perception of us. Not in terms of installs per dollar spent.”

The past week’s events have also amplified FTX’s brand awareness. But not in a manner that its pro sports league partners are happy about.