How To Navigate The Crypto Market Cycle 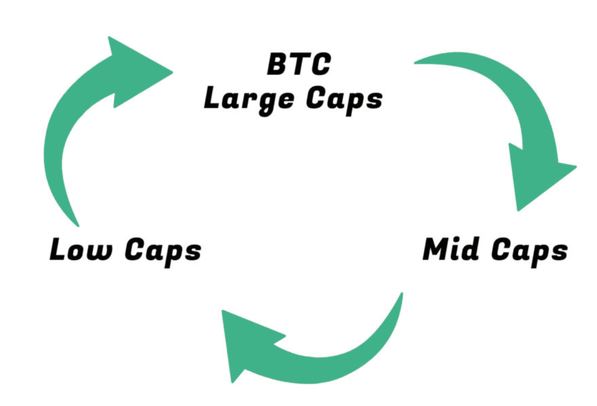 There is a clear pattern in the way money moves within the $120 billion crypto market and it takes new-comers some time to fully understand whats happening. The sooner you do understand, the better off you’ll be and the less random price movements will seem.

After reading this you will:

$120 billion is a relatively small market cap for an industry when we look at a single company like Coca-Cola with a market cap of $211 billion. This small market cap indicates the industry is still nascent and there is plenty of time left to learn and get involved.

The market cycle within crypto is:

This is a generalization and there are always random pumps and coins that buck the trend. For any investor, especially new ones, gains will come easier when you are on the side of the trend and flow of the market.

I’ll break down each step of the cycle and provide a general plan of how I shift my allocation throughout. Before we begin, I want to define a few things.

Since August, BTC and Alts have had a strong positive correlation. This means that when BTC moves, ALTS move with it, up or down. Since prices are so depressed, any glimpse of hope from BTC perks up the whole market.

During the bull run, BTC had a negative correlation with ALTS. I expect this to return at some point, so keep an eye out for any shifts in the market’s reaction.

Majors: ETH, LTC, BCH (I could include a few more but ill keep it simple)

Large Caps: Roughly the top 20 coins on Coinmarketcap.com minus BTC and majors

Low Caps: Everything else I know this is a rough way to sort but, it will suffice for this article 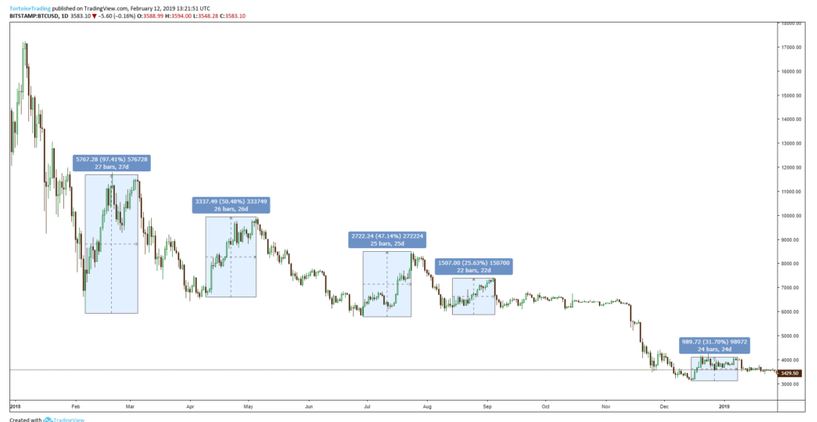 Usually BTC begins its next run following a drop in the market and some consolidation. Fiat/tether flows into the market pushing BTC up and majors follow along with it.

Ever since the bear market began, this stage has lasted on average 25 days. During this stage the safe bet is to hold BTC. However, for the past few months holding majors during this time has essentially been holding leveraged BTC further increasing your gains. I look through the large caps and usually pick 1 or 2 that I feel are showing the most strength. Once I start to see weakness in BTC/majors or the phase is around the 15-20 day mark, I look to exit and shift my allocation into mid caps and look for short setups on majors. 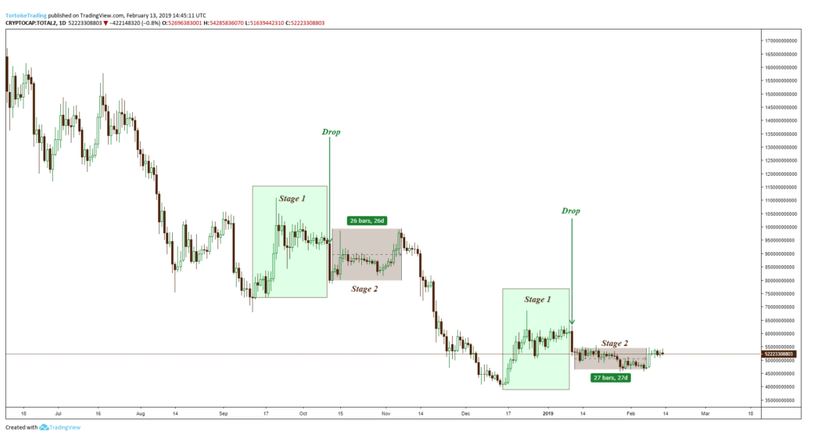 When BTC starts to move, large and mid caps perk up. Since the start of the bear market we’ve seen some coins die off and some see less pumps than others. Not all coins will rise again so to be safe, I stick to Binance when playing spot alts. If the coin is on Binance, at least for now, it’s a safe bet there will be enough demand for it to be traded.

Once BTC and majors start to show weakness there’s usually a relatively large drop that affects the whole market. This creates a great buying opportunity for Stage 2 and is when I aim to enter my positions. The drop pictured above is some money leaving the market and some money shifting to other coins in the market. From this point on, we can start to see BTC and Total Market Cap excluding BTC trend sideways. Keep in mind when looking at Total Market Cap, the majors/large caps make up a majority of the market. This shows that the same money is being transferred around from coin to coin and no new money is entering.

Stage 2 varies in length and many mid cap trends will begin in Stage 1. However, a majority of the gains will be in stage 2 after the “drop”. This also gives time for Alts to show strength with higher highs and higher lows on strong volume. Those are the coins I want to be in. 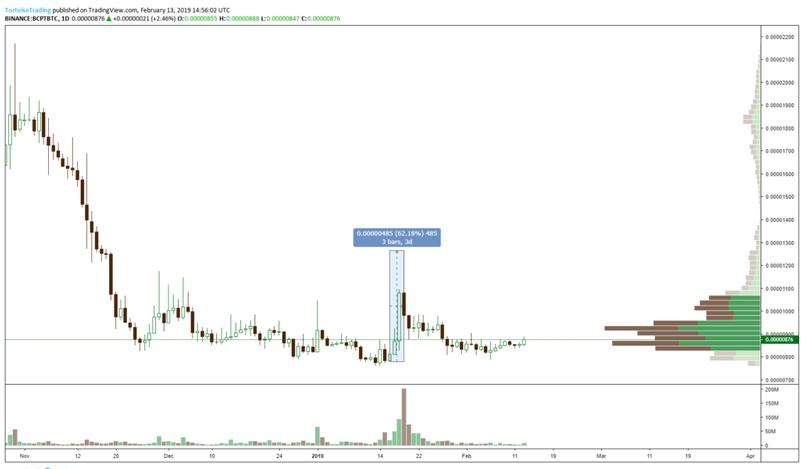 Right around when mid caps see the most volume and begin to peak, money flows into low caps. This marks the end of the cycle and I find this stage generally lasts 1-2 weeks.

Coins with thin books pump and dump first then the low satoshi coins. When trading pump and dump coins, don’t FOMO and buy the big green candles. More times than not they’ll close as giant wicks on the daily and you will have bought the top. When a trade is entered, assuming its on Binance, I recommend setting a stop loss and then alarms on Tradingview. This will keep the position protected and also provide alerts to signal when to sell. Currently, Binance doesn’t have OCO(one closes other) trading which allows a trader to enter a stop and a take profit at the same time. This makes trading highly volatile coins extra risky.

By the time the low caps begin to pump, the rest of the market is usually trending down and BTC is in a precarious position. I aim to exit all Alts and be in BTC and tether/fiat while the market decides where its going next. I never want to be caught in Alts when the market takes a dive. Don’t get married to an Alt, especially in a bear market. We are still so early in the space we have no idea which Alts will be the 1% that make it.

Where are we now?

Unless there is more blood to come, stage 4 didn’t last long this time around. Alts still bled and a handful even made new lows. Now, it seems we may be starting stage 1, where BTC and large caps shine.

Is this the reversal of the bear market? Nobody knows for sure, but my opinion is no.

I expect an eventual move up to the $5.5k-6k area where I plan to sell everything and open shorts. On this first test of the $6k breakdown I expect a sharp rejection that will send price to eventually retest the lows at $3k where I plan to re-buy. There is a volume gap from $3100 down to around $2800 that I expect price to fill before we reverse from the bear market.

Here is a short Twitter thread I wrote analyzing how I expect the scenario to play out:

Coins that move together

This is just an observation and can change at any time