THE MARKET CYCLE WEARS NO CLOTHES

12 months ago I dove head-first down the crypto educational rabbit hole, after seven years as a forex trader. It’s a steep learning curve. Dozens of market dynamics compete for relevance and attention. What follows is the single most important thing I learned in 12 months of intense study. One market dynamic stands above all others as most importafor investors and traders to understand. It’s a pattern — a simple, profound pattern that’s been hiding in plain sight for years.

Understanding the pattern begins with this diagram of the lifecycle of financial bubbles. 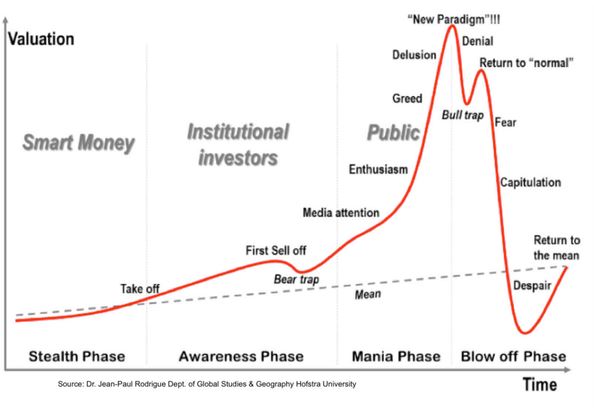 The red line’s path is not abstract— overlay a chart of almost any famous bubble from the past century and it’ll fit, somewhat dead on, contour-for-contour.

​The diagram is useful to investors during speculative bubbles. But in crypto, it’s taken on a whole deeper layer of meaning.

A Brief Financial History of Cryptocurrency 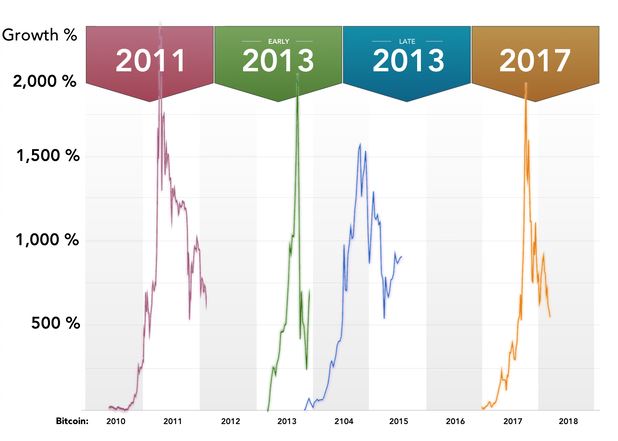 Here’s a bit of context, so you have something to compare it to. 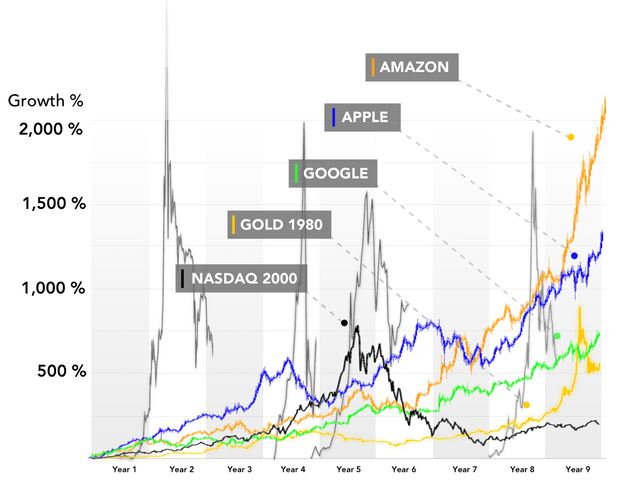 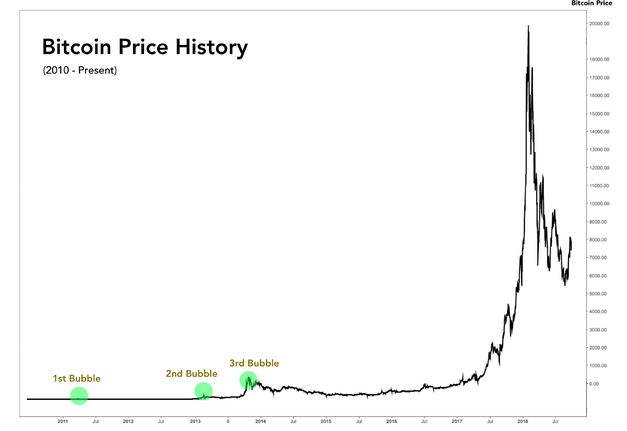 It doesn’t look like an uptrend— it looks flat, until 2017. That’s because the scale of the most recent bubble is so extreme that you can barely see the first three. But the same could be said of each previous bubble. Each went exponentially farther than the one that came before it. 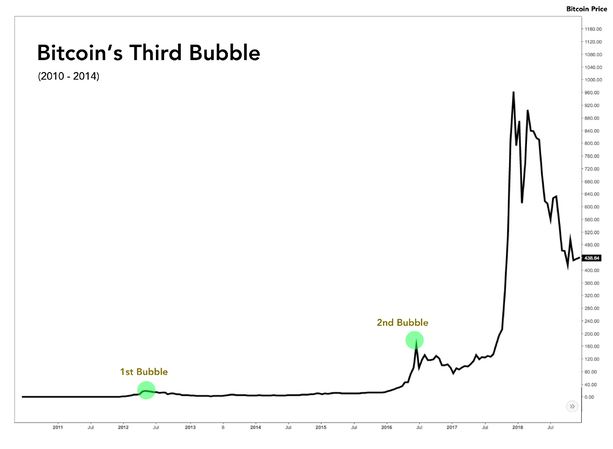 A Special Setting Helps Us See The Pattern 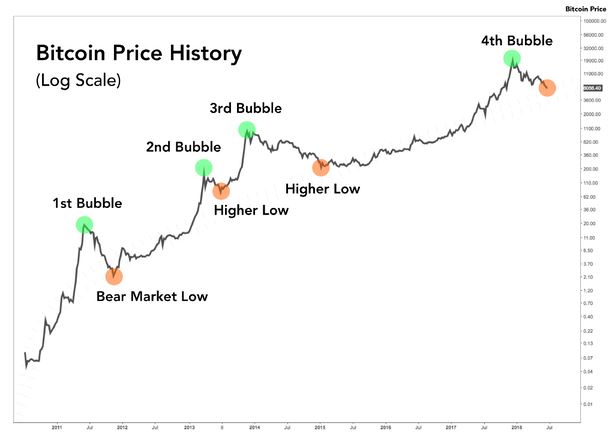 We’ve seen a familiar sequence of events on repeat, ever since Bitcoin’s beginnings in 2010. Here are Bitcoin’s four bull runs, by the numbers: ​ 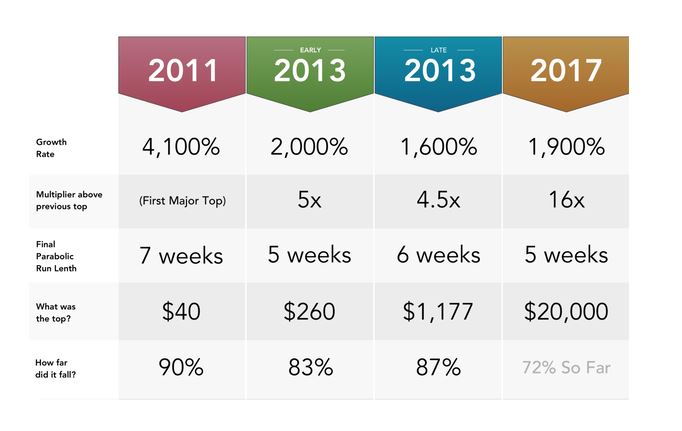 The pattern is straightforward. If anything, one might argue this is the most accurate Bitcoin chart of them all:

The Market Cycle is the Pattern

The pattern guiding Bitcoin’s path is none other than the mirror image of our collective psyche’s relationship with greed and fear. Since 2010, the lifecycle of financial bubbles has played double-duty as Bitcoin’s market cycle. It is our asset class’s calendar of emotional seasons, and it’s the cryptocurrency market’s Rosetta Stone.

Knowing how to operate effectively as a crypto investor or trader is predicated on awareness of one’s position in the cycle. Currently (at the time of writing) we’re near the end of Bitcoin’s 4th overall cycle, near the bottom of the bear market stage. (This article was published in August 2018). But identifying one’s position in the cycle is only the first layer of the onion.

Peeling Away the Layers

Each cycle has well-defined seasons, or stages. Each stage has its own unique set of market dynamics, and poses a different set of emotional and psychological challenges to market participants. History doesn’t repeat itself, but it does echo and rhyme — like faces on a stack of Russian dolls, each instance of a season inevitably shares its DNA forward cross-cycle with its younger, larger sisters. Understanding each season’s external market dynamics and internal prevailing psychological terrain is critical to survival and success in this market.

(The Market Cycle of Cryptocurrency as an Asset Class)

The cycle can be classified into four stages:

Our tour of Bitcoin’s market cycle is complete. Post-capitulation, the retail market will be processing shock and awe.The low volume weeks and months that follow are a time of opportunity for savvy retail buyers with fiat available on the sidelines. Bear market buying must be done strategically — I recommend @TheCryptoFam’s excellent tweetstorm on this subject. (Read it here.)

Knowing how to operate effectively as a crypto investor is predicated on awareness of one’s position in the cycle. Though awareness of one’s position is not a guarantee of profitability. Far from it. Just like following the north star doesn’t mean you’ll find your way. But awareness of the star’s presence paints a frame of reference on top of the world, one that makes a life or death difference if you’re adrift at sea. The metaphor obviously extends to your portfolio in a bear market.

Whenever we think about the future, it’s important to remember the one and only thing about the future we know for sure. Which is: we don’t know what’s going to happen. This forces us to think in probabilities. Which brings me to a hypothetical question. Picture a financial instrument: from its inception, it has done one specific thing, and done it cyclically, four times in eight years, at ever-increasing rates of scale. The question: over the next few years, what’s the highest probability scenario for that asset’s future?

Do you think Bitcoin will stop doing the thing it’s done four times in a row?

It could. That could happen. We have to acknowledge that. But is that the highest probability scenario? No. Absent poor fundamentals, an object in motion tends to stay in motion.

​And Bitcoin’s fundamentals have literally never been stronger: the New York Stock Exchange announced it will offer cryptocurrency custodial services and a Bitcoin futures contract; Goldman Sachs announced it’s opening an institutional crypto trading desk, and spent $300 million to acquire Poloniex, a top cryptocurrency exchange; Japan, South Korea, Singapore, Switzerland and the UK continue to lead their regions in crypto-friendly regulation; Mastercard just filed a patent for a cryptocurrency fractional reserve system (what could go wrong?); the SEC continues to deliberate on a Bitcoin exchange-traded fund; and the Lightning Network continues to grow, having already made Bitcoin transfers between institutions near-instantaneous.

​The highest probability scenario is that the market cycle repeats itself a fifth time.

​And that Bitcoin and altcoins go on another exponential parabolic bull run. (And crash afterwards.)

So Position Yourself For It Now

Now, and in the months that follow. As best you can. While prices are still low. The two most important skills to learn in preparation for the next cycle:

2. Learn how to take profits during (and after) a parabolic advance. Become a devoted student of this arcane, insanely relevant skill.

​Article was originally published on Hackernoon

How to use Stop Losses

What Is Market Structure