Analysts are ending the week with a little hopium after bitcoin broke through a falling wedge and is back chasing a new market dominance high. However, a good day for BTC generally means more pain for altcoins and that can be seen on markets this morning.

A few hours ago, BTC tapped an intraday high of $10,450 according to the charts. The move puts it back to Monday’s high and wipes out a week’s worth of losses. This week analysts have been predicting a drop back into four figures again but as yet that has failed to materialize.

From a low point of $10,050 the move adds 4% to BTC prices on the day and has been its second largest move this week. Daily volume has increased slightly to $15 billion but is still relatively low. 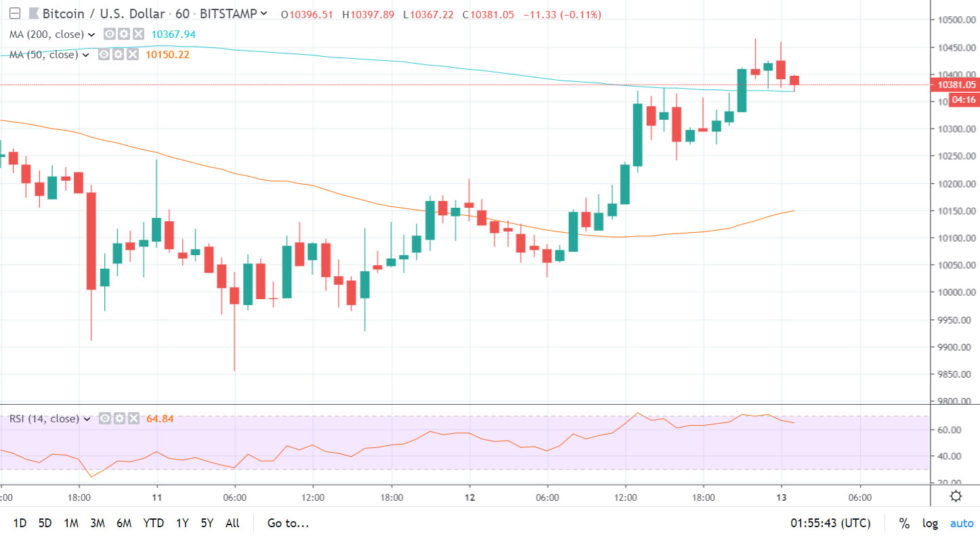 In the grand scheme of things these minor moves are irrelevant as bitcoin remains range bound, unable to break free from this sideways channel. What has happened though is a breakout from a short term falling wedge pattern and an increase in market dominance for BTC.

Today’s move has pushed bitcoin market share back up to 72.5% according to Tradingview.com. It is very close to its two year peak and likely to regain that even if there are no further price increases simply because altcoin markets are so weak.

Trader and analyst Luke Martin has observed this action claiming that alts will only see gains if BTC falls below $10k again.

Bitcoin upside likely puts a cap on the gains alts were seeing. Major alts starting to turn over. View on major alts retracing only changes if Bitcoin fails, and drifts back below 10k.

$BTC inching higher but the second part of this is more important for many on here:

Bitcoin upside likely puts a cap on the gains alts were seeing. Major alts starting to turn over.

View on major alts retracing only changes if Bitcoin fails, and drifts back below 10k. https://t.co/ohe5ied0NQ

At the time of writing bitcoin is still one of the day’s top performers, even with such a small percentage increase. Ethereum is clinging precariously to $180 where heavy resistance is preventing any further gains for the world’s second largest crypto asset. ETH has been flat all week and has failed to regain the psychological $200 level for almost a month now.

Ripple’s XRP is in danger of falling to another yearly low below $0.25 as company executives scramble to justify recent large token movements within the corporation. Bitcoin Cash is also flat and holding on to $300 while Litecoin appears to have found support at $70. EOS is still very weak below $4 and BNB has had a rough month collapsing to $20.

By all accounts there is more pain to come for altcoin markets.

Will altcoins ever recover this year? Add your comments below.

Will CryptoKitties New Blockchain Flow Be The Next Ethereum Killer?

The US and UK Are Losing the Cryptocurrency Race