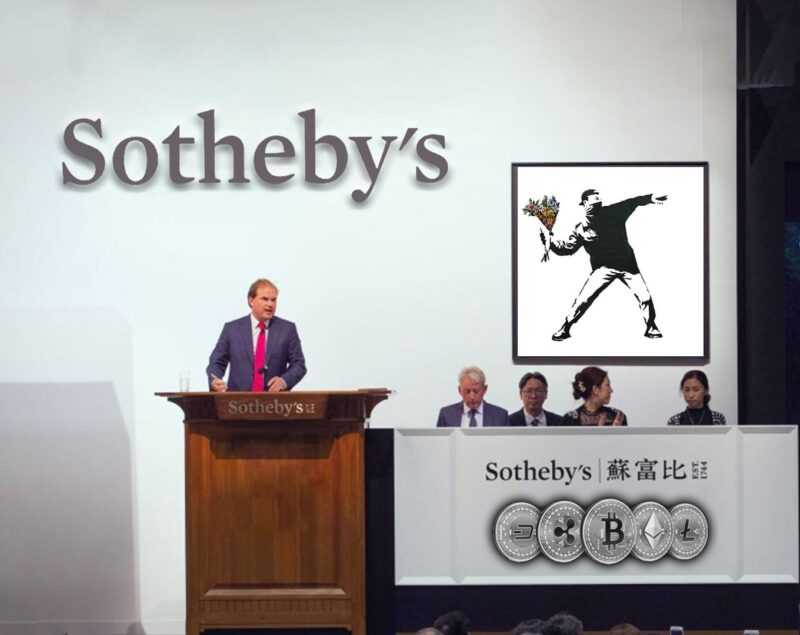 Auction house Sotheby’s – which offers bidding wars on some of the finest art, jewelry and wine available today – has announced that it will accept bitcoin and ether bids on an upcoming auction of “Love Is in the Air,” a piece by popular artist and bitcoin advocate Banksy.

This will be the first time that a largescale auction house is willing to accept crypto payments for art items up for bid, though the winner is also able to pay with USD should they so choose. Sotheby’s is simply opening the door to crypto payments if the winner happens to have a solid digital asset stash stored away somewhere that they have been dying to use.

Sotheby’s CEO Charles Stewart explained in an interview on Tuesday:

What better combination to introduce crypto than an iconic Banksy painting… It may well be that the winner of this painting pays in dollars and not crypto, but I think for us, creating the possibility for this is interesting. There is clearly a large audience interested in the NFT aesthetic and possibility there. Why wouldn’t that extend to the physical art world as well? It will be very interesting to see.

The auction is occurring through a partnership Sotheby’s has with Coinbase, one of America’s largest and most popular digital currency exchanges. This is the same partnership that allowed the auction house to sell off various non-fungible token (NFT) items created by an artist simply known as Pak to digital currency holders last month in April. During this time, more than 3,000 buyers took part in the event, and all the tokens sold for a whopping $16.8 million.

Banksy is a British street artist who has seen his popularity surge in recent months. His real name is unknown, but his artwork has often sold for millions of dollars, making him far more successful than Van Gogh was in his lifetime. At the time of writing, “Love Is in the Air” is one of his best-known pieces, and the auction is scheduled for May 12. It is believed that the bids will begin anywhere between $3 and $5 million.

How the Process Will Work

Regarding what Sotheby’s plans to do with any crypto it receives should it be used to pay for the item, the company said in a statement that right now, they are working things out where they will either hold the digital assets for Banksy until he is ready to claim them, or they will go ahead and convert the money into fiat for him should he so choose: