The Bitcoin network has been settling an estimated $10 Billion per day. This is according to data from the team at Glassnode that also explained that the daily transactions are of actual BTC changing hands. They explained their observation using the following statement and accompanying chart.

In 2021, the #Bitcoin network settles on average more than $10 billion (!) USD every day. This number refers to BTC actually changing hands – it adjusts for change volume and transactions between addresses of a single network participant. 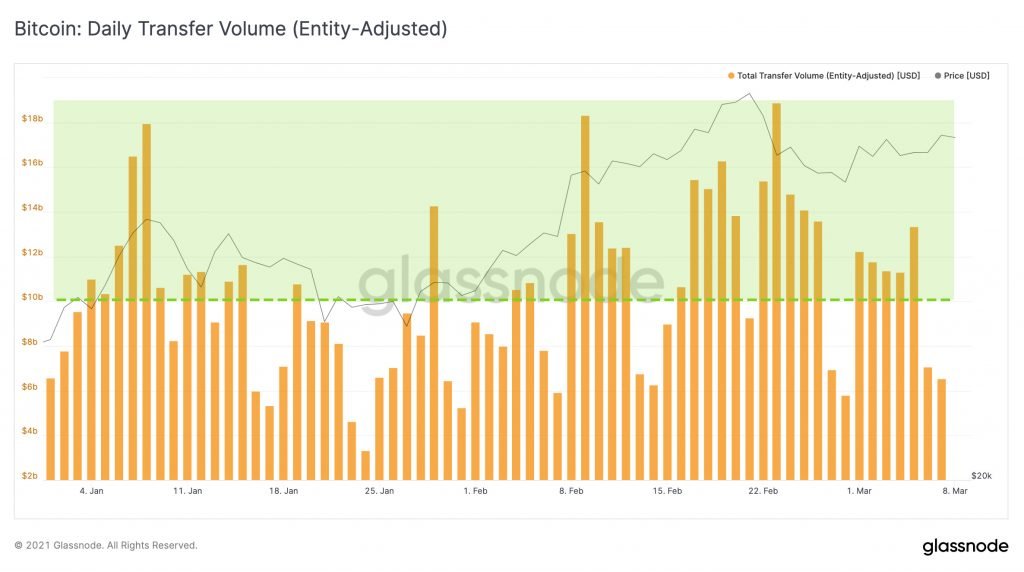 Institutions are Behind the Massive Daily Bitcoin Transactions

Key to the Bitcoin network settling such an impressive amount in transactions per day, are the institutional investors constantly scooping up BTC from exchanges. According to CryptoQuant, 15,700 Bitcoin worth roughly $850 million, left Coinbase yesterday, March 8th. The constant buying of Bitcoin through OTC deals has also resulted in the supply of Bitcoin on exchanges reaching a two-year low.

This in turn means that the said institutions buying Bitcoin are hodling as explained by the CEO of CryptoQuant, Ki Young Ju, via the following statement.

It seems most US institutions haven’t sold any Bitcoin since their OTC deals. For example, here are custody wallets from Coinbase outflows on Dec 23, 2020. No $BTC moved since then. Remember, institutions like @tesla are with us.

With respect to price, Bitcoin has reacted positively to news of the US Senate approving a $1.9 Trillion stimulus bill.

Since news hit of the stimulus package, Bitcoin has conquered the $50k and $52k resistance areas and is currently trading at $53,900.

Bitcoin’s return to bullish territory has led the team at Crypterium analytics to conclude that a retest of $57k is inevitable as explained below.

After [$52k], the price can start growing again up to $57,000. Most likely, we will see a stop in this zone since this is where ATH and the last major resistance are located. To break through this level, some positive news is likely to come out, which will force market participants to return to buying actively.

Top 3 NFT Marketplaces Had a Combined Trading Volume of $342M in Feb.

Millennials and Institutions are Pushing the Bitcoin Space Forward