The early week’s run-up in the bitcoin price has continued to run out of breath as BTC dips back under five figures.

The BTC/USD instrument settled a session low of $9,841.59 at around 16:05 UTC today, establish its five-day low. The pair moved downwards despite having full-backing of strong fundamentals. Late last week, Intercontinental Exchange’s cryptocurrency arm, Bakkt, announced that it had received regulatory approval to launch its bitcoin futures contracts. The platform even finalized the launch-date on September 23, raising hopes of attracting institutional capital to the bitcoin markets.

The benchmark cryptocurrency dropped nevertheless, signifying that investors did not fully digest an otherwise bullish Bakkt announcement. That left the market with a handful of interconnected reasons that attempted to explain bitcoin’s downside sentiment. Here are three of them.

A global slowdown kept investors’ purchasing sentiment at bay. A majority of them waited for the annual meeting of global central bankers in Jackson Hole, Wyoming, expecting a wave of new stimulus programs to address the recession concerns. Bitcoin appeared as a less-attractive asset for investors who were looking to park their capital in low-risk safe-havens. That explains a surge in demand for US Treasuries, which registered their best month since 2015.

It appears the early week rise in the bitcoin market did not come from the outside by from the underperforming, neighboring cryptocurrencies. Nevertheless, many analysts believe that monetary easing policies would help bring more money to bitcoin, for investors would be able to borrow at lower interest rates.

“Bitcoin’s becoming increasingly a macro hedge for investors against things that could go wrong,” said Thomas Lee, co-founder of Fundstrats Global Advisors. “Rate cuts are adding liquidity. Liquidity is pushing money into all these risk assets and also hedges, which is helping Bitcoin.”

Rising Wedge are bearish patterns, characterized by price trending upwards inside a contracting range. The technical indicator typically sends the asset’s rate lower once it reaches the apex of the Wedge. Bitcoin, for all the past few days, was trending inside a Rising Wedge, as shown in the chart below. 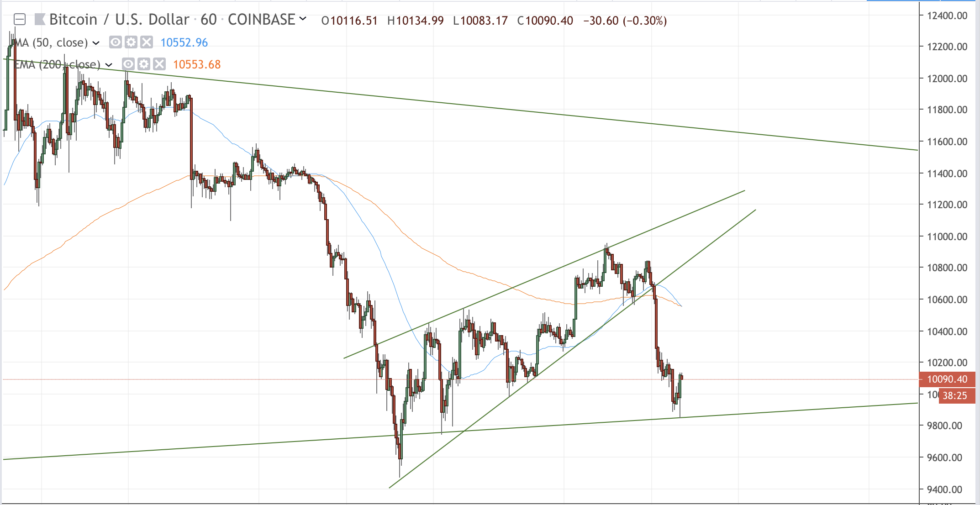 The bitcoin price today broke down from the same design, confirming its bias. It explains that the reason for the fall could have been merely technical, and has nothing to do with the cryptocurrency’s longer-term bias. The BTC/USD pair now expects to bounce back from the $9,651 area.

Arguable yet highly likely, the latest bitcoin price drop could have been driven by whales – a slang for investors holding a larger quantity of bitcoins. The early week saw the cryptocurrency rising by more than $800, or circa 8.5 percent, in the wake of Bakkt announcement. It appears that big traders led the price rally, and drove small investors in the ride to the upside. Nevertheless, they exited their long positions right upon entering their target price area. In the entire process, no outside money entered the bitcoin market.

These are some of the possible reasons behind the bitcoin price drop. Have something to add? Then do share in the comment below.

Why do you think Bitcoin has fallen back below five figures again? Add your thoughts in the comment section below!

The post Three Reasons Why Bitcoin Price is Back Under $10K… Again appeared first on Bitcoinist.com.

The creator economy: How we arrived there and why we need its Web3 upgrade

Why One Beverly Hills Surgeon Is Saying “Yes” to Crypto Payments