News
ByAuthor BitcoinistPosted on May 16, 2020

After a bearish daily close in most top tech stocks and the Nasdaq-100, the outlook is grim, and the increasingly bullish cryptocurrency market may suffer as a result.

Many other tech stocks had a similar close. This type of candle almost always signals a reversal in the short term.

During more dominant trends, they act as only a pause before the overall trend takes back over. But with more pain set to hit the economy, a downtrend is likely to continue.

That would suggest that the bearish engulfing candle is instead a reversal of the short term rally from lows set on Black Thursday.

This also could indicate that a more severe correction could be beginning with the start of this candle.

Bearish engulfing candles occur when the trading session closes below the previous candle’s body entirely, fully engulfing it. This is a sign that although bulls made a strong showing, bears took back control.

Bitcoin Could Be Next If Daily Closes Below $9,300

Bitcoin did not form such a candle, but may be working on one. A late evening crash to $9,200 created a wick below the previous day’s candle body.
A close below $9,300 would cause the same bearish engulfing candle to close across the cryptocurrency market, potentially signaling more downside before another attempt at $10,000 is made. 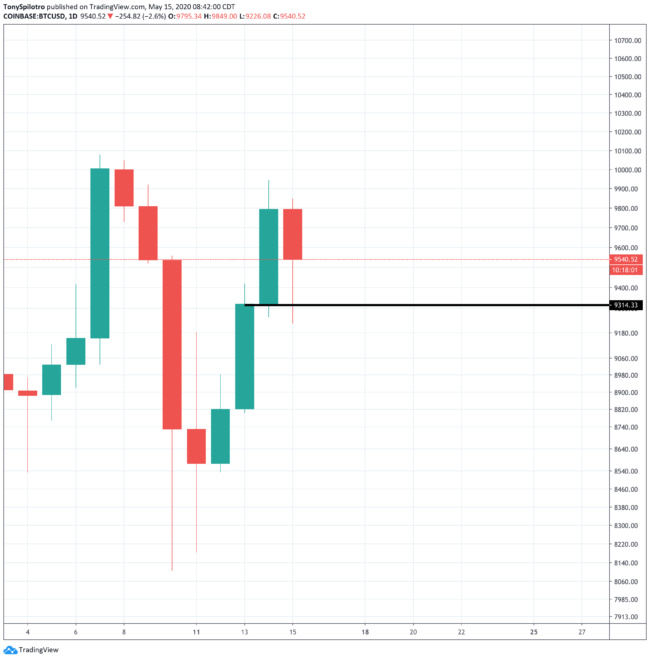 Bitcoin continues to struggle with overhead resistance. After a couple recent rejections at $10,000, it may need to dip lower to renew buying interest again.

The halving fueled rally may now be fading, and sell pressure from capitulating miners could be responsible for further correction.

Experts in the field claim that Bitcoin may spend another 100 days trading before it eventually takes out the powerful resistance and begins a new bull market.

And because so many buyers are currently in profit both across Bitcoin and stock since taking advantage of low prices, profit-taking could turn into another panic drop with the economy on such thin ice.

Today’s daily close in Bitcoin is critical, and all eyes will on if it follows tech stocks and closes as a bearish engulfing.

This Key Factor May Determine Where Ethereum Trends in 2020

Dash Is Not the ‘Most Used’ Crypto in Venezuela, Despite Previous Claims