Today we are going to talk about Waves and its milestones since inception in 2016. We think that it is important to summarize the biggest achievements so far to understand where the project is heading and why the leaders choose a direction over another.

Waves platform is a decentralized platform launched by Sasha Ivanov and his team (@sasha35625) in 2016.

They raised $16 million through an ICO and became one of the largest fund raises at the time.

They were clearly positioned as a direct Ethereum competitor and managed to release their mainnet (LPoS, DEX, Waves-NG) early 2017, just a few months after their crowdfunding.

At the time, it was possible to trade on the DEX, leasing your tokens to a Waves node and earn some interests and compound your interests through staking.

In 2018, Waves team kept improving their products and released the first implementation of smart contracts on their proprietary chain while offering their blockchain expertise to other companies.

They made sure to make it through the bear market while many projects were shutting down and leaving the crypto industry.

Neutrino protocol is another innovation powered by Waves. It is a decentralized stable coin backed by Waves tokens. The team started developing it in 2019 and made it operational in 2020.

We had previously made a comparison with other « traditional » stablecoins and their technical differences here.

Early 2020, Waves created a non-profit organization to ensure the perpetual development and growth of Waves ecosystem. The structure endorses a democratic model keeping its members’ sovereignty.

It is now responsible of dispatching the tasks between working groups over the 3 main areas of activity: Waves protocol, Gravity protocol & Open Finance.

Born as a result of Waves researchers trying to find solutions ,in 2019, to blockchain inter-communications, Gravity quickly became a holistic approach on how to tackle a global issue.

This is the first token-free blockchain-agnostic protocol allowing interoperability between different blockchains and the outside world.

As of now, it is running on a public demo net but a public test net will be available in October and the main net is supposed to be out at the end of this year.

Since Gravity project, Waves has constantly been expanding its network. Each new participant becomes an extension of the others by bringing value to the entire ecosystem. The end-goal is to become the largest network of the crypto industry with the aim of satisfying any single need. 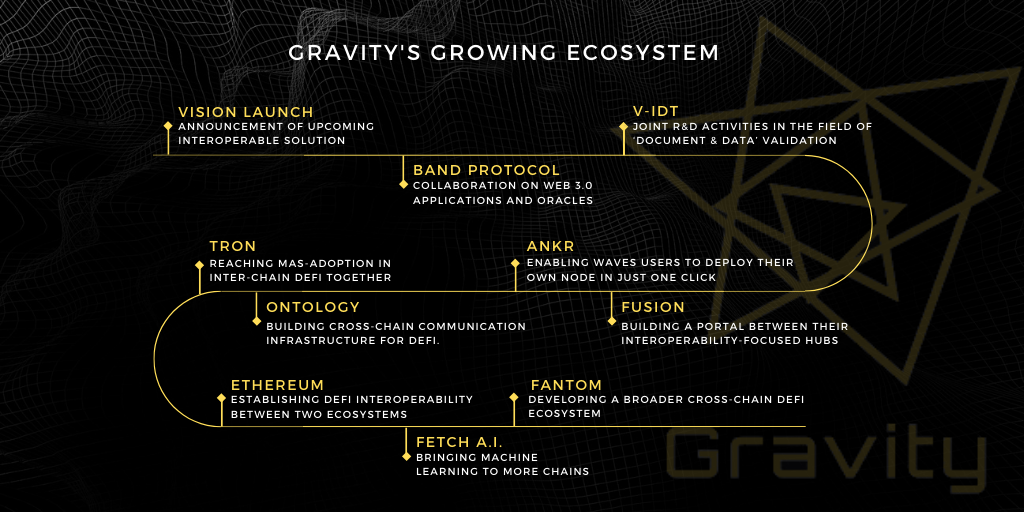 Waves keeps proving that it is one of the most active and serious projects in the space constantly innovating and looking for strategic partnerships strengthening the ecosystem.

With the long list of reputable partners Waves collaborates with and their constant improvements, there is no doubt that the team will ensure to make of Waves a serious alternative to other decentralized platforms.

ChainLink (LINK) Can Now Be Used to Book Accomodation in 2.2M+ Hotels

Why is ULTRA Building Their Own Blockchain and Using EOSIO’s Technology.

Official Opening of Blockchain Village at Medini (BVAM) in Malaysia

Data: The Number of Bitcoin Whales Has Never Been Higher

Bitfinex CTO: Tether (USDT) is Registered with FinCEN and Regulated