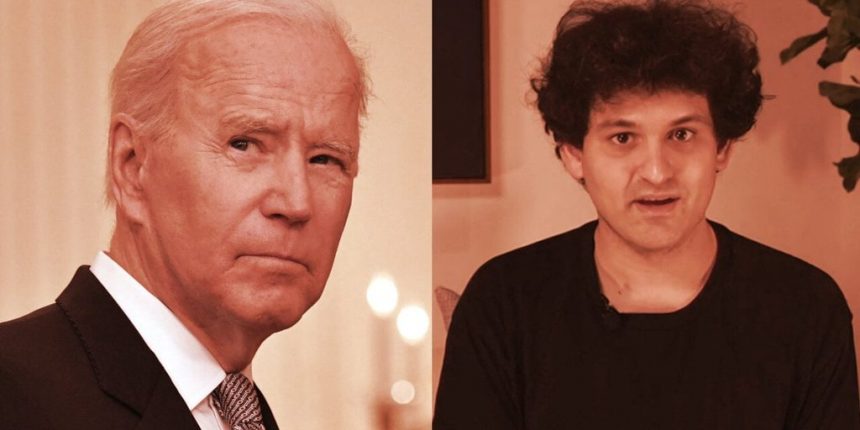 The White House has refused to clarify whether it will return any political donations made to President Joe Biden by disgraced FTX founder and former CEO Sam Bankman-Fried.

In response to questions regarding the status of the millions of dollars in political donations made by Bankman-Fried (potentially with stolen customer funds) during a Tuesday press conference, Jean-Pierre said that she is barred from publicly discussing the subject, or the president’s views on it, due to provisions of the Hatch Act of 1939.

“I am covered by the Hatch Act,” Jean-Pierre repeated four times on Tuesday in response to questions from Zeke Miller, White House correspondent for the Associated Press. “I’m happy to say [that] over and over again, because we believe in the rule of law here,” Jean-Pierre said, directing Miller to take up the issue with the Democratic National Committee.

The Hatch Act, signed by President Franklin D. Roosevelt, is primarily intended to prevent non-elected executive branch employees from making openly political statements. Most clear-cut violations of the law have involved heads of federal agencies endorsing political candidates, or attempting to run for political office themselves.

Notably, the president is fully exempt from the Hatch Act, as is the vice president, as both politicians are elected officials who routinely endorse candidates and participate in partisan politics.

It therefore remains unclear how clarifying President Biden’s views on donations made by Bankman-Fried—in light of the founder’s arrest Monday for eight criminal charges including conspiracy, wire fraud, and money laundering—would risk jeopardizing Jean-Pierre’s compliance with the Hatch Act.

Not only would President Biden’s opinions be exempt from the Act, but the matter of discussing Bankman-Fried’s litany of questionably funded, now criminally scrutinized political donations does not appear to constitute the endorsement of any political candidate. U.S. prosecutors in New York on Tuesday charged Bankman-Fried with campaign finance violations, along with seven other crimes, including wire fraud and conspiracy to commit money laundering.

In the months preceding Bankman-Fried’s downfall, the founder made some $46.5 million in political donations—the vast majority of which went to Democratic candidates, according to data compiled by nonprofit OpenSecrets.org. Those donations made the FTX founder the Democratic Party’s second-largest donor, trailing only businessman and philanthropist George Soros.

Though the majority of Bankman-Fried’s donations were made in the run-up to the 2022 midterms, the now-jailed crypto executive donated $5 million in 2020 to Future Forward USA, an organization that in turn funded the Future Forward USA PAC—a political action committee that shelled out more than $70 million in the final weeks of the 2020 presidential election on a blitz of pro-Biden ads that ran across the country.

In the days following the stunning collapse of Bankman-Fried’s crypto exchange FTX last month, reports alleged that the founder routinely took customer funds, transferred them to other companies, including his struggling trading firm Alameda Research, and used them for his own purposes. It remains unclear whether he used stolen customer funds to fund his political donations.

On Tuesday, FTX’s new CEO and liquidator John J. Ray testified before Congress that FTX’s theft of customer funds was one of the most unsophisticated cases of fraud he’d ever dealt with.

“This is really old fashioned embezzlement,” Ray said. “This is just taking money from customers and using it for your own purpose. Not sophisticated at all.”

But numerous other politicians who received money from Bankman-Fried, including President Biden, have yet to publicly address the matter.