On the 26th of April BitMax had the opportunity of hosting an AMA with the xDai team, listed below are some highlights of what was discussed!

Igor — welcome to BitMax community, please say hi to everyone and introduce yourself and your team!

Hi guys, happy to be here!

I’ve been involved with Ethereum based projects for quite a long time, and am the founder of the POA Network. With POA Network we created an Ethereum sidechain with a Proof-of-Autonomy consensus, where all validators are United States Notary publics. The network is largely autonomous now, the validators run the chain, but we also created a strong R&D focus at POA, and have been building a robust open-source explorer called BlockScout, which is now the primary explorer for Ethereum Classic. We also built TokenBridge, which provides interoperability between different blockchains. These efforts have all come together to produce the xDai Stable Chain.

From what we’ve seen, xDai Chain was launched in 2018 jointly with MakerDAO foundation, are you able to describe the project in more detail?

The initial launch of the xDAi chain was a collaboration between POA and MakerDAO. The idea was to create a chain specifically for stable payments, designed for digital cash transfer. The chain also needed to be connected to the Ethereum mainnet, so Dai could be transferred back and forth from Ethereum to the xDai chain.

So we built an Ethereum compatible sidechain with xDai as the native token and enabled the TokenBridge for interoperability between the two chains. This meant that Dai could be locked in the bridge contract and then minted as xDai on the xDai chain. Right away, some great projects came on board to serve as validators (MakerDAO, Gnosis, Portis, SyncNode etc.).

Developers also started deploying to the chain – all applications which work on Ethereum also work on xDai – so they created applications like Burner Wallet which made the chain very user friendly, even for people who had never used crypto before! That was how it started. Since then usage and tooling have grown as more projects have migrated to xDai. Its been used by 1000s of people at conferences and as a major platform for Community Currencies.

Do you mind sharing a little bit more about the relationship between Dai and xDai? Why xDai is needed and why does it serve as a better payment intermediary?

This includes the Splunk conference, where over 10,000 attendees, many of whom had never used crypto, were onboarded and used xDai to navigate the conference.

The xDai stable chain is a platform for the currency, which is also called xDai. Dai is a stable coin on the Ethereum mainnet, but it is still difficult to make a simple payment using Dai. You need Ether for gas as well as Dai, and you don’t know what the fees will be or how long the transaction might take. So if you can bridge Dai to another platform where everything is fast and predictable it’s an ideal situation.

That’s exactly what we did when we created xDai. Dai is locked in a bridge contract, then minted on the xDai chain, where payments are very fast, inexpensive, and predictable. Users can send xDai to one another or to vendors easily while the currency maintains its value.

xDai also enables micropayments – some contracts may be processing a lot of requests, a lot of transfers and costs can add up on other chains. For example, community currency projects in Kenya are seeing a lot of volume, lots of transactions, and xDai keeps these costs manageable.

There are obviously other Dai “derivatives” — what are the key differentiations and competitive advantages of xDai?.

The xDai token was actually the first Dai derivative, and it was designed specifically to capture fast, stable payments on a sidechain. Other derivatives have been created for different platforms, and most are designed to capture additional earned interest. cDai earns interest for users on Compound, iDai on Fulcrum, and rDai earns interest for 3rd parties like charities and developers.

We are actually leveraging another variant called CHAI with the new POSDAO consensus. Users lock Dai in the bridge, but it is converted to CHAI, which earns automatic interest based on the Dai Savings Rate (which is very low now but we hope will rise in the future)

This interest is then distributed as an additional reward to stakers (validators and delegators) in the protocol. It’s exciting to see all the new derivatives, they tend to compliment one another within the entire DeFi ecosystem.

Lets talk a bit about use cases and real work application — currently, where is xDai being used? What additional use cases are being planned for the future?

xDai has been operational from October 2018 and is actively being used by projects around the world. In fact, it’s the most used blockchain for events in the western world.

Check out the list of conferences where it was used https://www.xdaichain.com/about-xdai/use-cases/cryptocurrency-for-events-and-conferences including EthGlobal events, Devcon 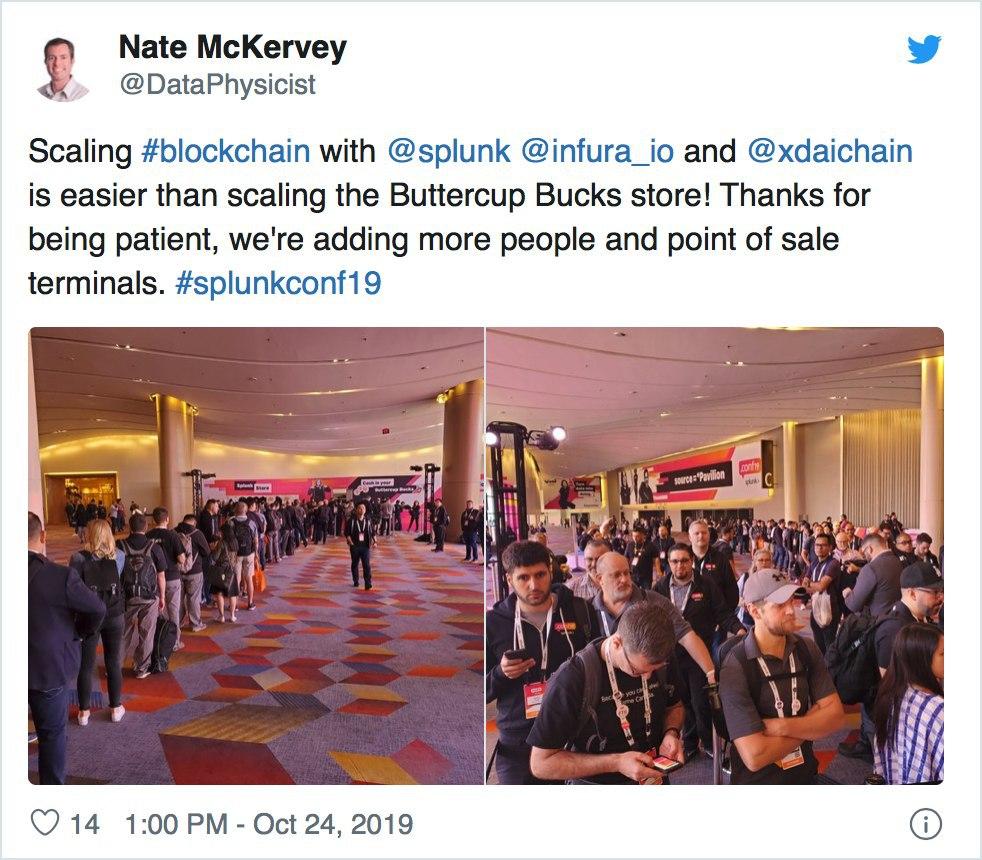 all those people have BurnerWallet with xDai on their phones

Community Currencies, which are local currencies for villages which have difficulty accessing cash and liquidity, have been running on xDai, which is really exciting. A project by Grassroots Economics in Kenya is using the xDai chain to distribute local tokens which are used to power the entire economy of the village. Here’s some more on that initiative.

We’re excited for future projects – one promising use-case is with DAO voting and governance. Often, DAO initiatives may require a lot of back and forth, a lot of communication, value exchange and other things that need to happen on-chain just to pass a single vote.

On xDai, this can happen using a stable token without incurring large fees. At EthDenver 2020, the collaborative DAO processes all ran on xDai. The Galt Project is also creating their DAO infrastructure on xDai.

xDai Chain implements a dual-token mechanism, can you share a bit more about the other token: $STAKE, the role it plays in the ecosystem and how does it capture value and potentially appreciate?

STAKE is used as a staking token to protect the xDai chain and to enable delegated staking and community participation in xDai consensus.

Validators must stake a minimum of 20K STAKE to be considered, and delegators must stake a minimum 1K STAKE to participate. Validator candidates with larger pools of STAKE (their own STAKE + the amount from delegators) will have a greater chance of becoming validators, but ultimately this will be determined by an on-chain random number. Validators will serve for 1 week periods. At the end of 1 week, a new set will be selected, based on the same criteria. During the staking week, validators and delegators will earn STAKE and xDai rewards for participating as honest validators. 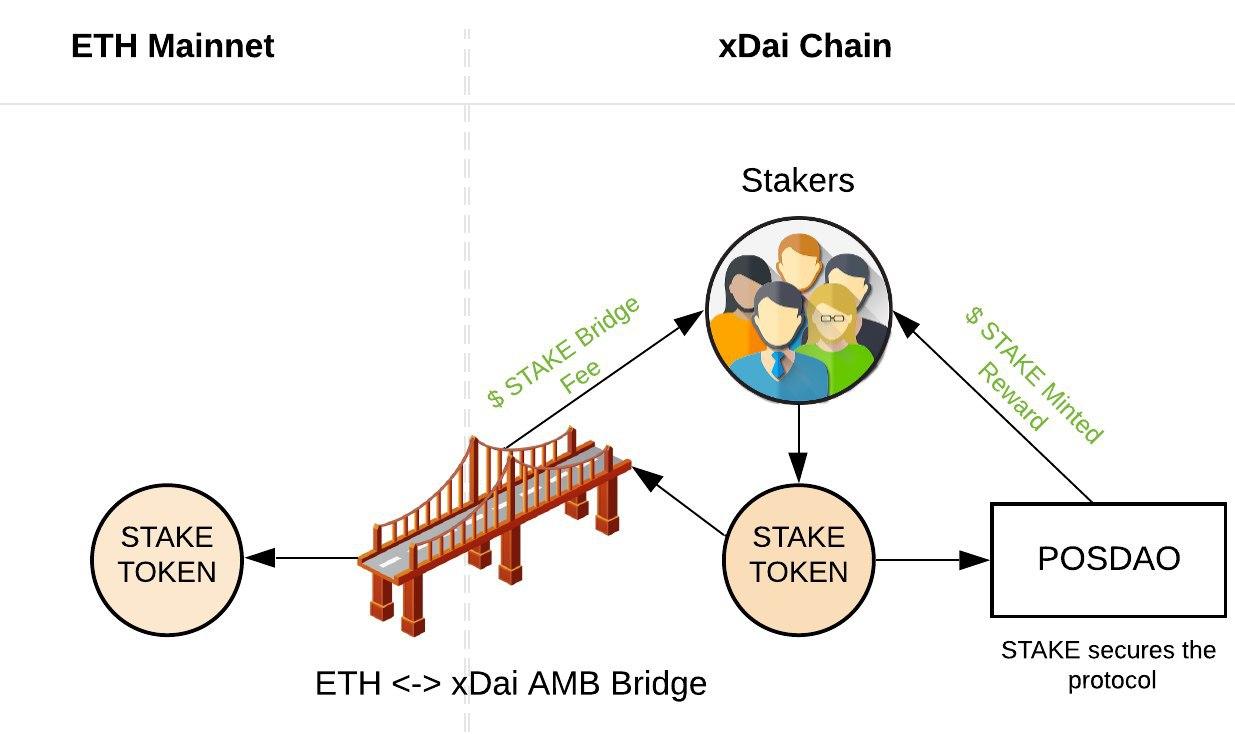 Here is an example of additional collected fees for stakers

The total STAKE supply is 8,537,500, and only 400,000 will be available in the public auction. STAKE locked in the protocol will earn additional STAKE through emissions for the validators and delegators.

Details about distribution are available here:

All additional chains will distribute emission reward within the same emission curve of STAKE token. This will create a network effect for STAKE holders.

Lots of excitement around $STAKE auction tomorrow — can you please share some details about fundraising, investors and circulation of $STAKE?

We’ve been planning this transition for some time, and have a dedicated group of initial seed investors and private investors who want to support the xDai chain becoming more decentralized.

We are planning a modest public auction, and have a commitment to supporting the chain through the liquidity fund, designed to promote the chain, and the ecosystem fund, which will support new applications and on-chain initiatives. We are dedicating 77% funds raised in private + 50k worth of STAKE tokens into the liquidity pool. 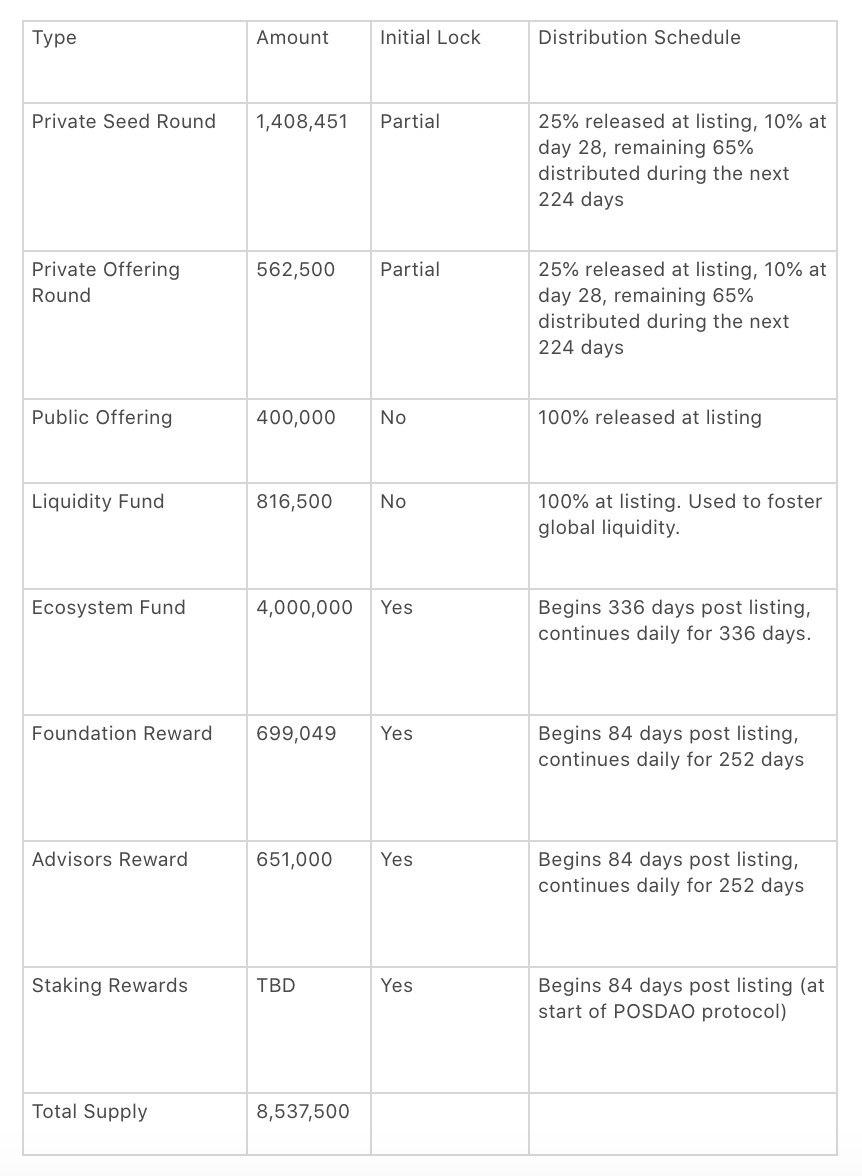 Can you share some details about the xDai Chain community?

The community is supportive, especially the developer community. Developers have really embraced the chain because the tools are familiar, everything is open-source, and we are happy to help developers achieve their goals on the chain.

Any contract that runs on Ethereum can also run on xDai, as we keep the chain updated to the latest forks to ensure that compatibility. The user community is also engaged, although many don’t even know they are using xDai to achieve their goals (Community currencies in Kenya for example).

They just know that things work well and that crypto can actually be easy to use. We also have tons of collaborations going on with community leaders.

The current list of validators on the xDai chain – this will change when public staking starts – includes POA Network, Giveth, Portis, MakerDAO, BurnerWallet, SyncNode, AnyBlock Analytics, Nethermind, Protofire, Gnosis and Galt Project. To date, these validators have subsidized their nodes in order to provide a stable chain for users. 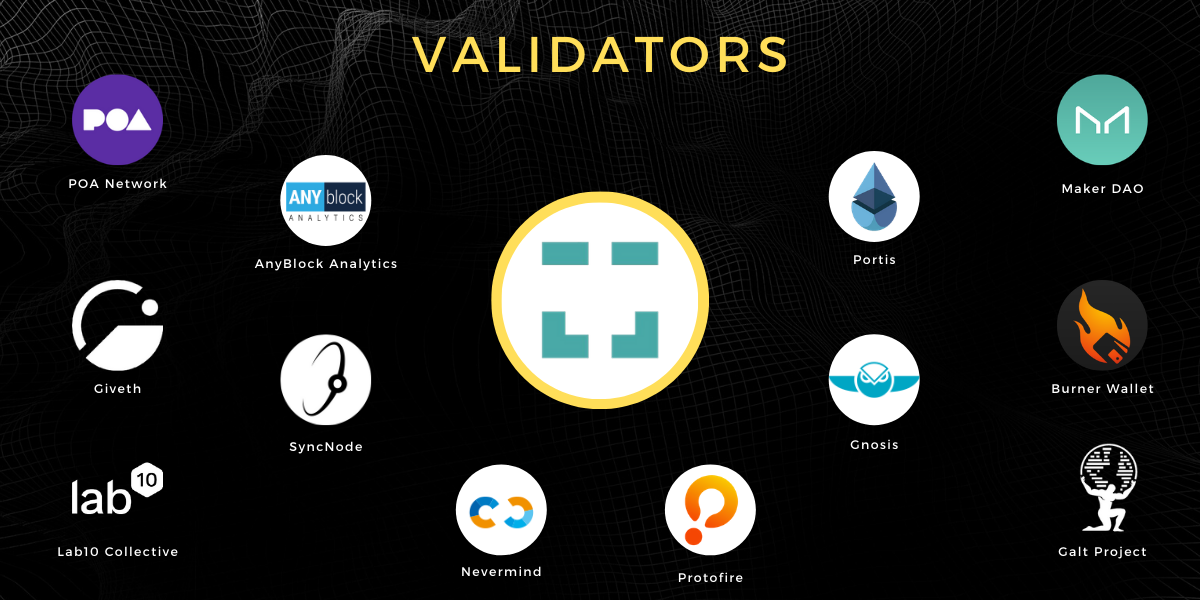 Support extends to the greater Ethereum Community. Many thought leaders and influential individuals in the space have also experienced the “magic” of xDai

Okay last question — why did xDai Chain choose to work with BitMax?

We’ve chosen to work with BitMax for a few reasons.

✅ First, BitMax supports staking and validation services and has been consistently moving towards DeFi and derivatives.

✅ Second, BitMax provides an important bridge for xDai into the international marketplace. While developers are very familiar with xDai, there are still many opportunities to expand xDai usage into new communities across the globe.

✅ Third, we are looking for long-term collaboration partners, and BitMax is committed to providing ongoing support for STAKE and the xDai stable chain.